Three 15-year-olds spend their summer building a makeshift house in the woods and find themselves along the way in the coming-of-age tale The Kings of Summer. 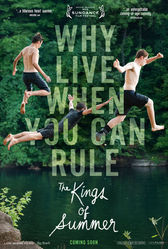 Back in 1979, my closest friends and I scoured the landscape to collect every type of building material we could get our hands on. The goal was to build a ramshackle “fort” in a clearing in the woods near our home. It became our home away from home. This was serious stuff for guys only and required an oath of silence to gain access. Inside was our sanctuary away from our parents, along with the contraband of youth, including discarded food from the local Cumberland Farms convenience store and, of course, a highly coveted stash of Playboys. It was, quite literally, a hovel, but it was our hovel. It leaked. It stank. It was filled with bugs, but it was also a magical ground zero for our burgeoning youth. We built it with our own hands, and no one could take that away from us. Within its walls, we talked about how we controlled our own destiny and fooled ourselves into believing we could handle anything should Armageddon or overprotective parenting come to bear.

The Kings of Summer is that same story for Joe (Nick Robinson), Patrick (Gabriel Basso) and Biaggio (Moises Arias). Joe, no longer able to fathom life with his Dad (Nick Offerman), decides on a bold plan of action to build a house in the woods and enlists the help of his best friend Patrick, who is having issues with his own parents (Marc Evan Jackson and Megan Mullally). Along for the ride comes Biaggio, a strange and wonderful oddball, who’s possibly the most memorable character of the year.

From the very first frames, the film feels very much like what Stand By Me would be if it were a Wes Anderson film. It’s quirky, a bit campy and with heart that just won’t quit. The film seamlessly weaves in and out from teenage angst drama to uproarious comedy. It’s at its best when the boys are in the woods where practically every shot drips with nostalgic reality.

The kids are all exceptional with each playing off the other perfectly. The supporting cast provides a nice, reliable foundation. Offerman as Joe’s Dad gets the best lines, while Mullally evokes the quintessential helicopter Mom.

The script gets lost now and again, devolving into disconnected skits that don’t flow as easily as the rest of the film but then regaining its footing just as quickly. As a dark, unconventional comedy, it’s not going to appeal to everyone, but for the rest of us, it’s a cute, funny walk down memory lane.