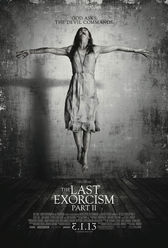 I really hate when filmmakers develop unnecessary sequels to perfectly good stand-alone movies just to try to capitalize on the success of the originals. More often than not, the sequels are lousy and derivative, and they bomb with fans and at the box office. The sequel to The Blair Witch Project is the most obvious example of this hubris resulting in failure. A smart, exciting, original independent horror film called The Last Exorcism came out in 2010 and completely surprised me with its unsettling horror presented as the making of a documentary. The key word in that film’s title is “last.” Sadly, some producers, including the talented horror maven Eli Roth, decided that maybe there should be more of the main character from the 2010 movie. The result is The Last Exorcism Part II. The title alone would scare away most horror fans. Worse than that, the film fails to live up to its creative origins and instead delivers rather conventional scares and situations that are typical of possession movies.

Cowriter/director Ed Gass-Donnelly and cowriter Damien Chazelle are the responsible parties for this underwhelming movie that has about one redeeming characteristic in the performance of Ashley Bell. Nell Sweetzer (Bell) was the young lady who was possessed in the first film and contorted her body into unusual positions while under the influence of a demon. After some hospital time, Nell is released to a halfway house in New Orleans run by Frank Merle (Muse Watson). Nell makes fast friends with other gals in the house, including roommate Gwen (stunner Julia Garner with curly hair reminiscent of Bernadette Peters). Things aren’t all right with Nell because she begins to hear voices, have flashbacks and see her dead father Louis (Louis Herthum), who warns her that this demon Abalam — not to be confused with the similar-sounding Genesis song and album — is still out to get her soul. You just can’t keep a bad demon down.

Before long, Nell is levitating off her bed, and strange things happen at the house. This story is far afield from the ambitious plot of the original film. In fact, it smacks of every other possession movie that I’ve ever seen. Nell meets a potential boyfriend named Chris (Spencer Treat Clark) at the motel where she works, but ultimately, she has to deal with this whole demon thing. Is it in her mind, or is she really still possessed? Can spiritual folks Cecile (Tarra Riggs), Calder (David Jensen) and Jeffrey (E. Roger Mitchell) rein in Abalam and save Nell? What do you think?

I would be on board with the film if it tried something new or exciting. It doesn’t. There are cheap scares like a barking dog jumping at Nell out of nowhere and overdone sequences like birds flying into windows. (Didn’t I just see that in Dark Skies?) Most of the spooky events here showed up in The Exorcist years ago and other horror films over the years. I really wanted to like this movie more, but it unfortunately is a victim of a double whammy: nothing inventive in the plot and scary scenes that seem to be chosen from a standard list of horror movie clichés. The special effects are good and at least not clunky or obvious. From makeup and CGI to physical and auditory effects, all of the ingredients are here for a great horror flick, but the cook seems to have lost the recipe book.

Bell keeps the movie from being a total loss. The folksy Watson and pixyish Garner make strong impressions in their scenes as well, but Bell is the star that this film relies upon. The lissome redhead appears almost entirely without makeup, which makes her look quite different if you happen to see any shots of her dolled up to promote the film. She certainly immerses herself into the role, and her work prevents some scenes from crossing the threshold into camp. I’d watch her again in a heartbeat but hopefully not another sequel. I’m a huge horror fan, and I know that the people involved like Roth and the writer and director come from horror backgrounds and fandom. That’s what frustrates me so much when I see a half-baked effort like this. The people involved should know better, and the niche fans deserve better. It’s hard to create a film that appeals to both regular moviegoers and horror lovers. If you’re not going to reach out to the former, you at least need to satisfy the latter. The Last Exorcism Part II is not that movie, but at least Nell ends up with a great pair of boots.