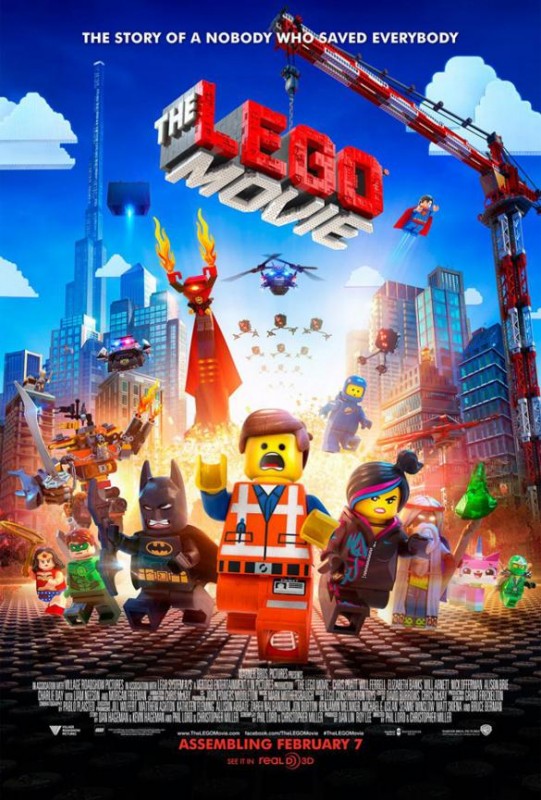 I first encountered LEGO bricks in the late ‘70s. I was torn between sinking all of my meager savings from chores, birthdays and holidays into LEGO sets or my new Atari 2600, and the video games prevailed. Were it not for a greater addiction to video games, I could have gone down that path of LEGO collecting. I would have been just fine because the amount of creativity and variety invested into the brand has extended through decades of products and, to come full circle, a number of successful LEGO-based video games. I was rather surprised when I heard about The LEGO Movie. I expected it to be nothing more than a made-for-home film that got shoved into theaters. I was taken by surprise with the fun and inventiveness in the story as well as the celebration of everything LEGO.

Writers/directors Phil Lord and Christopher Miller (directors of 21 Jump Street) had great success in the same roles on Cloudy with a Chance of Meatballs, another silly film that transcended the target audience of children to appeal to a wider audience. The LEGO Movie has that same goofy attitude and outrageous graphics that, in this case, mix disparate LEGO series into one big universe and use LEGO bricks as the basis for all characters, backgrounds and effects (even fire and water).

At first, you can’t make much sense of the plot, but as the story changes from one bizarre setting to the next, it begins to gel. Emmet (voiced by Chris Pratt) is a LEGO Minifigure construction worker in Bricksburg who dutifully goes to work every day and doesn’t think about his humdrum existence, especially when the theme song of the LEGO world (and movie) is “Everything is Awesome.” (You won’t get this song out of your head for days.) In a case of perfect timing, Emmet manages to find the Piece of Resistance, a special brick that will help a number of other characters and the Master Builders bring down the evil Lord Business (Will Ferrell), who also runs the company Octan as President Business. The wizard Vitruvius (Morgan Freeman) predicted that a “Special” character will help them defeat Lord Business, and the sassy gal with the purple streak in her hair known as Wyldstyle (Elizabeth Banks) leads Emmet in their quest. Wyldstyle’s boyfriend Batman (Will Arnett) and a pirate friend named Metal Beard (Nick Offerman) help out, but this is ultimately Emmet’s story and how a lowly Minifigure becomes the savior of the other LEGO characters, not unlike Neo in The Matrix.

I was very impressed with the voice talent in The LEGO Movie. You might expect the actors to be less important than the visuals, but they are even more important here to pull off this project. Pratt is chipper, Banks is sultry and spunky and Ferrell emotes each line in his signature style that some people hate and others love. Those familiar with Arnett know the deep voice he uses to overplay serious characters. He goes into that mode for Batman. You can’t go wrong with Freeman; the guy has played all sorts of characters — both God and the President — in his career, and it’s obvious that he’s having a lot of fun with Vitruvius. Liam Neeson is another (mostly) serious actor who moves outside of his comfort zone here as the Bad Cop/Good Cop figure who rotates his face from one expression to the other. There are a lot of cameo appearances of actors and other celebrities that usually coincide with cameos of the LEGO versions of themselves or their notable characters. I won’t ruin any of them because part of the fun of this movie, especially for adults, is the discovery of the characters from the LEGO universe who are included. Rest assured that Star Wars and other notable licensed LEGO series show up in The LEGO Movie.

The visuals and special effects are quite impressive here because the movie’s a mixture of stop-motion animation and traditional computer graphics in which the line is blurred between the two. Sure, it all looks like it’s made with LEGO bricks, but that would take forever to produce. Just ask director Michel Gondry about making the iconic video of “Fell in Love with a Girl” by The White Stripes. Instead, the visuals all seem to come from the same place in a uniform style that applies across the entire movie. The plot takes Emmet and his friends through a number of places within the LEGO universe like The Old West and futuristic settings. Every part of the scenery, including smoke and other weather elements, uses LEGO pieces in the composition, so LEGO fans will have some extra fun in spotting pieces that they might have used in the same way. Computer graphics are particularly necessary in motion and character facial expressions, actions not so easily created with bricks alone. The filmmakers know exactly when to play to the strengths of the tools they use to build each scene. The result is a fabulous treat for the eye, especially in the kinetic finale that’s full of explosions, chases and characters flying through the air. As I say time and again, 3D versions almost never offer anything visually that’s worth the extra money. AMC and Regal theater chains did a sneaky thing to boost 3D ticket sales by offering special Minifigures with the 3D version of the movie for a limited time. I picked up Pyjamas Emmet when I saw the film, but I saw nothing in the 3D version of the movie that made it better.

Because I never kept up with the LEGO series over the years, I don’t recognize a lot of the characters and pieces as well as a LEGO devotee might. I’m about to take the plunge and pick up a new set based on The Simpsons, but the film will play on a different level to LEGO fans. For an expert opinion, I turned to a friend’s son, 11-year-old Andrew Raccuglia, for his opinion on The LEGO Movie. “I thought it was great,” he told me. “5 out of 5 bricks! My favorite thing was how they mixed all the LEGO worlds together, and I also liked how the message of the movie is to be creative. You don’t always have to follow the directions!” Well said, Andrew.

To address his last comment, you might have heard that the film does have a message because of an unexpected reveal in the final minutes of the movie. I don’t spoil movies, so I won’t get into it here, but I have heard people turn discussions of this film into philosophical commentary about toys and creativity. They’re thinking too much. This is a fun movie that celebrates creativity in the nature of its plot and doesn’t reduce to a giant commercial for LEGO products any more than Wreck-It Ralph promoted certain video games. LEGO devotees have made some pretty impressive artwork like famous album covers, and that push to use the LEGO medium to do fun and unique things is what this is all about. The LEGO Movie walks the fine line between silly humor and biting satire and strays across that line in both directions at various times. The music from Mark Mothersbaugh adds to the zaniness. Given the success of the film and the promise of a sequel, everything is awesome for the filmmakers. Audience members will feel awesome, too, for a while after watching The LEGO Movie.