I finally got around to seeing The Men Who Stare at Goats. The previews for this one had me thinking that it looked like a dark comedy that might be a bit too dark. Yet it still had something that kept me interested in it. One of the big concerns was the director, Grant Heslof, who previously directed George Clooney in three other movies I really didn’t like—Leatherheads, Good Night, and Good Luck and Intolerable Cruelty. He seems to have become George Clooney’s personal director. I’m going to assume they have some sort of partnership as his last three movies have all been Clooney vehicles as well as his next two upcoming efforts. 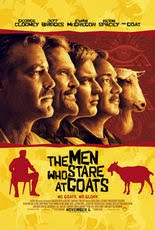 The Men Who Stare at Goats boasts a strong cast with Ewan McGregor, Jeff Bridges, Kevin Spacey and the aforementioned Clooney. The story starts with McGregor’s character, a journalist, desperate to prove to his estranged wife that she’s made a mistake in leaving him. He concludes that finding journalistic success in Iraq will provide the means to win her back. Once arriving in Iraq he’s sidetracked when he meets Clooney’s character, a special forces agent, who reveals to McGregor the details of a secret psychic military unit tasked with using their mental powers to end all wars.

These men think of themselves as Jedi’s which provides a nice funny inside joke given McGregor’s turn as a Jedi in the Star Wars saga. The Jedi, it’s said, all have super powers and they spend their training time honing their skills through various levels of achievement. Of course much of the success is, quite ironically, only in the minds of those involved and the journalist knows this. All the same it’s a story he can’t escape so he tags along with Clooney across the Iraq desert on a mission he’s not even sure exists outside of Clooney’s own mind.

The pacing is very slow. This is anything but a laugh-a-minute comedy. Much of the plot unfolds too slowly for my tastes but when the laughs do come they’re funny and quite memorable. There are quotable moments throughout that could catch on if enough people see the movie. Clooney, for example, claims to be trained in the art of invisibility and can, when needed, employ the “sparkly eyes” technique. Later he talks about being cursed having been given the dreaded Dim Mak death touch. It all works because Clooney plays the character entirely straight. Ultimately McGregor evolves from all-out skeptic to believer and we go along, willingly, for the ride.

Jeff Bridges character seems like a solid replaying of The Dude from his past camp hit The Big Lebowski. Kevin Spacey’s character provides us the antagonist though he really isn’t fleshed out enough to make the most of it. Regardless both are excellent.

The story is entirely unbelievable but that doesn’t matter. Seeing it all through McGregor we buy into it just as he does and it does give us just enough room to suspend disbelief to enjoy the experience. I’d spend more time working on the review but I’m hard at work focusing on the wall in front of me. I’m going into the next office.