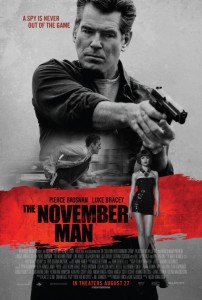 A resourceful CIA operative is brought out of retirement to protect a valuable witness in The November Man.

Peter Devereaux (Pierce Brosnan) was making the most of his retirement from the CIA, living the good life in quiet obscurity and surrounded by the calming beauty of Switzerland. When a critical witness to a major Russian plot is threatened, the CIA calls on the only asset (Devereaux) whom they believe is capable of protecting her.

Once he accepts, he heads off to protect the witness, Alice Fournier (Olga Kurylenko), only to find himself targeted by his old CIA protégé David Mason (Luke Bracey). Mason seems just as surprised to find Devereaux at the other end of his aim.

Why would his own company want him exterminated? Who at the CIA ordered the killing? No longer able to trust anyone, Devereaux must protect the witness while working as quickly as possible to piece together the mystery. 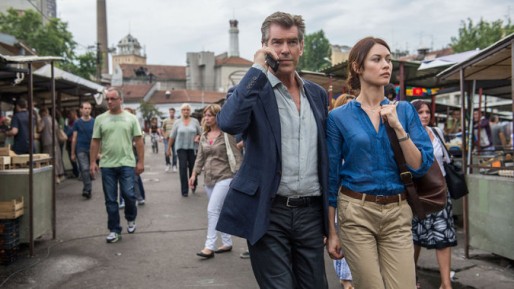 Never have I struggled so mightily to construct a brief synopsis like I just did above. The reason is that I’m still not entirely sure it’s even remotely accurate. Why? Either this is one completely broken script, or nearly every character has an acute case of multiple personality disorder.

Director Roger Donaldson (No Way Out, The Bank Job and Thirteen Days) clearly hoped this would remind everyone of James Bond sans the martinis. He went so far as to cast Kurylenko to play opposite Brosnan knowing that she played the chief Bond girl in Quantum of Solace. What he clearly didn’t spend time on was making sure the story made any sense whatsoever. Characters change allegiances and personalities as if they have no recollection of what just happened the moment before. Devereaux is a cold-blooded killer in one scene and a saint in the next. The witness (Fournier) can’t decide if she’s the innocent type or a SWAT team natural. Other characters bounce between good and evil as if their personas are tied to a trampoline. It is absolutely maddening and results in a story line that’s nearly incomprehensible.

Brosnan carries no blame. He looks every bit the part and is barely changed from a similar role that he played nearly a decade ago in the hilarious 2005 film The Matador. The action is really the only saving grace. Thankfully, Donaldson gives us plenty of it with perfect execution. It’s fierce, electric and tense. It’s when the characters open their mouths that it all falls apart.

If the goal was to create a new Bond-like experience, they missed the target. This one was more like 003.