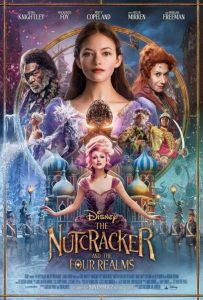 You already know not to judge a book by its cover. (As a roller coaster enthusiast, I can’t ever look at a paperback cover again that has Fabio on the cover without thinking of his collision with a bird on Apollo’s Chariot in Busch Gardens Williamsburg back in 1999.) Similarly, I would suggest that you not judge a movie by its poster(s) or even its trailer(s). If you do, you might miss out on one of the many films that catch you off guard and entertain from beginning to end. I had that kind of experience with The Nutcracker and the Four Realms. From the opening bird’s POV flyover shot to the credits, you won’t lose focus or interest in this unusual fantasy mixture of influences and visuals. The Nutcracker and the Four Realms feels like the best parts of Labyrinth, The Chronicles of Narnia and The Wizard of Oz set in the world of the ballet of The Nutcracker and using its iconic music for further emphasis.

Directors Lasse Hallström and Joe Johnston (reshoots) work from a script by first-time screenwriter Ashleigh Powell that’s based on an E.T.A. Hoffmann short story and the legendary ballet. I know very little about The Nutcracker, so maybe that’s why I’m so fond of this movie. For some people, this might be too much of a departure from the ballet, while for others like me, it stands on its own as a fantasy adventure. Clara (Mackenzie Foy of The Twilight Saga and Interstellar) attends a Christmas Eve party thrown by her godfather Drosselmeyer (Morgan Freeman), a skilled inventor who once shared his knowledge with Clara’s recently deceased mother. The children at the party follow strings from a central location to their Christmas gifts, and Clara’s string takes her into a magical world and a key that will unlock an egg left to her by her mother. Clara gets mixed up in the politics of the world, where the citizens remember her mother and a war brews between the regents of three realms against Mother Ginger (Helen Mirren). This all sounds a little loopy, but if you give it a shot, you’ll be pleasantly surprised by the adventure that waits on the other end of Clara’s string.

When I saw Labyrinth in 1986, I knew that Jennifer Connelly would be a star, and I have that same feeling with Foy after this movie. Foy has complete command of the screen whether she leads combat with denizens of the fantasy world or explores the emotional sides of Clara. The captivating Foy had that same effect in Interstellar with a smaller role, so it’s refreshing to see her advance to the lead position. Foy plays off a few familiar adult actors who help to further entrench the story in the fantasy genre. Freeman could voice a mouse, and it would have the gravitas that accompanies his tones and presence. It makes sense that he portrays Drosselmeyer and serves as an encouraging presence to Clara. Mirren exudes joy and playfulness as Mother Ginger unlike many of her more serious and action-oriented parts. I’ve always appreciated Keira Knightley from her breakout role in Bend It Like Beckham to today. She injects both creepy and sickeningly sweet into Sugar Plum and adds a strange voice to top it off. Like Mirren, she has fun with her role, and her strange persona fits the story perfectly.

The luxurious sets rival the gorgeous costumes to provide a feast for the eyes every bit as appetizing as Drosselmeyer’s Christmas Eve banquet. Victorian London offers its own stately architecture and vast ballrooms. The production designers took that feeling of awe into the Four Realms with sites as varied as a snow-covered forest and a castle teeming with toy soldiers. The beautiful costumes step right out of paintings and dazzle with their beauty and detail. Clara’s journey and personality allow her to wear both elegant dresses and a soldier’s uniform. The distinct Realms themselves (Flowers, Snowflakes, Sweets and Amusements) inform the costumes, decorations and general atmosphere. Special effects enhance the practical effects that establish the action. Scenes that include mice joining together to form a larger character or a device that shrinks people or objects don’t seem out of place in the rich, fantastical visuals.

In today’s action-movie environment, it’s possibly a gamble to focus an adventure on a girl. The Nutcracker and the Four Realms proves how the strength of the material transcends the gender question and perhaps explains why A Wrinkle in Time turned into a dud. Present a girl as a heroine with brains as well as beauty and brawn, and you encourage a generation of girls to strive for more than the stereotypical jobs and roles that society usually suggests. I love puzzles and contraptions, and the story embraces such devices that Drosselmeyer invented as well as similar objects in the Four Realms created by Clara’s mother, who also once visited that world. A Rube Goldberg device early in the movie mirrors the inventiveness of the filmmakers as well as Clara.

Music features heavily, especially some interspersed familiar themes by Tchaikovsky for The Nutcracker, but the original James Newton Howard score does not merely reinterpret the ballet’s music. Resistance to the film could have been because people expected a movie version of the ballet that even the trailer could not fully disprove. Ballerina Misty Copeland appears two times to display her beauty and grace. First, she tells the story of the Four Realms through dance, which fits perfectly with the explanation of the war between Realms to Clara. Additionally, Copeland dances over the credits as a wonderful coda to the production. Much like the surprise that Clara finds within the puzzle egg, The Nutcracker and the Four Realms contains treasure for moviegoing audiences that merely requires a little extra effort to discover. 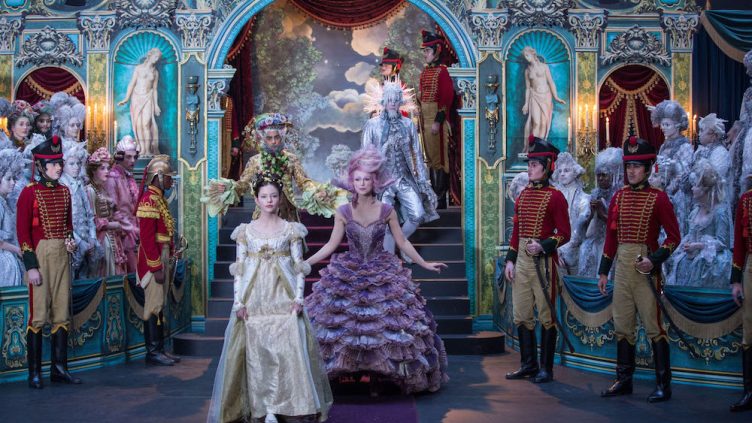