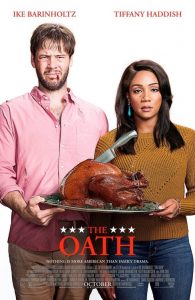 A political news junkie threatens to ruin his family’s Thanksgiving in The Oath.

There was a time when Thanksgiving conjured up images reminiscent of a Norman Rockwell painting. Oh, how these simple visions have faded, replaced by a minefield of potential tribalism from which there seems no escape. This year’s holiday weekend takes on new meaning when the President gives everyone until Black Friday to sign a loyalty pledge to protect both him and the country. Its overtones and obvious repercussions drive liberal-minded Chris (Ike Barinholtz) into a frenzy already fueled by an addiction to nightly political news. As the date approaches, Chris finds himself among an ever-shrinking populace unwilling to take the oath. He fears his go-along-to-get-along parents (Chris Ellis and Nora Dunn) may have already signed on. His conservative brother (real-life brother Jon Barinholtz) and his latest girlfriend (Meredith Hagner) most likely signed on before the ink could dry. Even his closest friends seem to be leaning toward what they all so recently characterized as unthinkable. His wife (Tiffany Haddish) and like-minded sister (Carrie Brownstein) will be his only allies around this year’s table.

Barinholtz wrote and directed this quirky, often fascinating experience. He came up with the concept from the darkest recesses of his own political nightmares. An unapologetic and socially engaged liberal himself, Barinholtz was driven to create a story that encapsulated the emotions and challenges for both sides of the political divide. The result is a film that attempts to walk a very fine line between campy and creepy, between reality and dystopia. Most viewers will be taken in early on by the film’s curious concept. It hits close to home regardless of your political bent. We even forgive the film for some truly awkward dialogue. It’s the film’s second act that determines its ultimate fate. Just as the family settles into what seems to be a new norm, Barinholtz shifts gears and transforms a dark comedy into a dark thriller dominated by an unforgettable performance from Billy Magnussen as an intensely-focused government agent. If you buy into it, the rest of the journey is invigorating. If you don’t, the finale plays like a slowly deflating bagpipe.

The most interesting part of the experience reminded me of the old parable of three blind men all describing an elephant. None of them agree on the specifics because each of them experience it from a different perspective. The same is true here. Liberals and conservatives will experience two entirely different films. Each is equally entertaining. 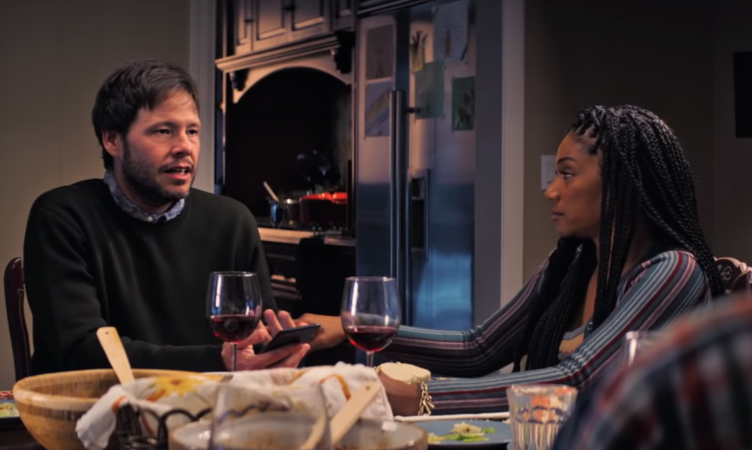