This year’s collection of animated shorts is a mixed bag because it includes two shorts that people have already seen as lead-ins to Disney feature films and the others are not as strong as in years past. There’s a clear favorite in The Oscar Nominated Short Films 2014: Animation that people will latch onto, but it is not my favorite. With animation, length does not always mean more minutes of captivating material. Sometimes, a smart director can pack a punch in just a few minutes, and that’s the case this year. The program includes all five Oscar nominees, followed by three “Highly Commended” shorts that are better than almost all of the nominated ones. I’m reviewing these shorts in the order in which they were presented.

The framing sequence for the shorts is actually better than some of the entries in the collection, and I’d be perfectly happy if they edited these scenes into its own short for people to watch outside of the current presentation. Martin the giraffe (voiced by Mac McDonald) and Clive the ostrich (Kerry Shale) are on some sort of job. Clive’s supposed to be a stand-in for Buzz Lightyear, and Martin does the same for Woody. They crack jokes and comment on animation work as well as other characters like Elmer Fudd, Daffy Duck and Mickey Mouse. This is good stuff that keeps the mood light in the theater even if some of the shorts are buzzkills.

Get a Horse! (6 minutes, USA) is an example of how classic Disney characters can still be brought forward into a modern setting and entertain audiences. Cowriter/director Lauren MacMullan (a director for The Simpsons and Avatar: The Last Airbender) assembles Mickey Mouse, Minnie Mouse, Horace Horsecollar, Clarabelle Cow and Peg-Leg Pete for a story that, at first, looks and feels like a classic black-and-white Disney cartoon. Pete menaces Mickey and his friends, and when he throws Mickey to get to Minnie, Mickey goes through the movie screen into the theater where the cartoon is being shown. What follows is a funny romp in which the characters go in and out of the cartoon and our colorful world. Get a Horse! was shown before Frozen, so I had already seen it a few times by the time I caught this collection. Like the best Disney and Warner Bros. cartoons, this one doesn’t get old. It’s notable for using sound clips of the original voices of the characters and stringing them together, including Walt Disney himself as Mickey. The title becomes a punch line.

Mr Hublot. (12 minutes, Luxembourg/France) has a gorgeous world that I would love to see expanded into a feature film. Writer/director Laurent Witz and codirector Alexandre Espigares (an animator on TV series, including Star Wars: The Clone Wars) immediately draw us into the world of the titular character, an accountant who has OCD and must switch lights on and off repeatedly and turn knobs and handles a certain number of times before operating devices or opening doors. The short has a very detailed steampunk or mechanical design, and I found myself trying to absorb as much of the scenery as possible. The story has our hero save a doglike Robot Pet that’s left on the street corner below his house, and it gets more complicated and endearing as the creature grows exponentially. No dialogue is necessary to convey this simple plot, but there are two songs — one in the middle and one sort of theme song during the credits — attributed to Li-Lo* that leave you smiling as much as the animation. This is the type of short that fascinates and entertains no matter how many times you come back to it.

Feral (13 minutes, USA) has a dark, strange style that matches its moody story. Writer/director Daniel Sousa uses pencil and charcoal drawings and no dialogue to show what happens when a “wild child” is saved from a pack of wolves and brought back to civilization by a generous man. The first half is good, and then the film uses abstract images for the second half that made me wonder what was happening and left me confused when the credits started rolling. Perhaps Sousa got lost along the way and didn’t know how he wanted to end the film. I like the animation to a point. It’s distracting when you see all of the imperfections of the lines as they’re moved and redrawn. That’s simply the nature of this type of animation. If Sousa had sold me on the ending, I could recommend this short. As it is, I’m on the fence.

Possessions (14 minutes, Japan) mixes a Japanese tradition and anime style to show what happens when a traveler stumbles upon a shrine in a rainstorm. Director Shuhei Morita sets this short in the 18th Century, and the idea behind it is that certain tools and instruments attain souls after a span of 100 years and trick any people who come near them. These objects are called tsukumogami. This film is very strange and oddly comical. The man who enters the shrine first encounters a bunch of broken umbrellas with eyes looking out of them and a dancing frog who teases him. The man uses his skills of fixing objects to appease the spirits in the umbrellas as well as others that later appear and attack him. This short feels like a sequence in a longer animated movie that I would like to see in its entirety rather than just this taste of it. It’s limited to the encounter between the man and the spirits, but I just didn’t see the wow factor in it.

Room on the Broom (26 minutes, UK) is the longest and most ambitious of the program. Fortunately, the film keeps your interest because it’s an adaptation of a popular book by Julia Donaldson and Axel Scheffler (also authors of the book that was adapted into The Gruffalo). Directors Jan Lachauer and Max Lang (cowriter/codirector of The Gruffalo) and writers Lang and Donaldson take their time telling the story of a wacky witch and a collection of animals who want to stay with the witch. Simon Pegg narrates the story, and Gillian Anderson voices the witch. Initially traveling with a cat (Rob Brydon), the witch attracts a dog (Martin Clunes), bird (Sally Hawkins) and frog (David Walliams) as she drops objects while flying and meets these animals while searching for her possessions. A dragon (Timothy Spall), who wants to eat some “witch and chips,” tracks the witch and her guests. I was surprised that the finale reminded me very much of The Gruffalo. The animation is smooth and seems to mix stop-motion work with computer imagery. Again, this shares the same technique as The Gruffalo. Look for a squirrel and a snake from The Gruffalo to make cameos of sorts. This entertaining short is almost a “long,” and that sometimes dilutes the story and impact.

à la Française (7 minutes, France) is the first of the Highly Commended shorts and a real hoot. A number of directors set this colorful short in the middle of Versailles in 1700 and replace human beings with chickens. These aren’t any ordinary chickens. They’re dressed like the French royalty of the time and engage in activities like dancing, playing croquet and protecting the palace. The running gag of the film is that a chicken author is documenting the events of the day and spies on the other characters. Things go awry when these pages blow around the palace in the wind and the chickens read what the writer has notated. This short is everything I want in an animated short. It’s funny, it takes us to an unusual place and the beautiful animation is colorful and unique.

The Missing Scarf (7 minutes, Ireland) is perhaps a bit too cerebral at times for some people, but it’s very funny. Writer/director Eoin Duffy uses paper cutouts and computer animation to tell the story of Albert the squirrel, who is looking for his lost scarf. He encounters a few different animals, each of whom has a fear like failure, rejection or disappearing into nothingness. The best part of the film is the narration by George Takei. He should do more of this type of work because his pacing and pronunciation are both unique and spirited. Will Albert find his scarf or just a lot of other animals missing things in their lives?

The Blue Umbrella (6 minutes, USA) was tacked onto the front of Monsters University. Director Saschka Unseld mixes real streets and objects with computer-generated objects that develop faces and human qualities to show a simple love story between a blue umbrella and the red umbrella that he spots in the rain. This is a lovely short with real emotion and memorable music. The seamlessness between the animation and the real world setting sells the short, and the story has you rooting for the blue umbrella all the way. 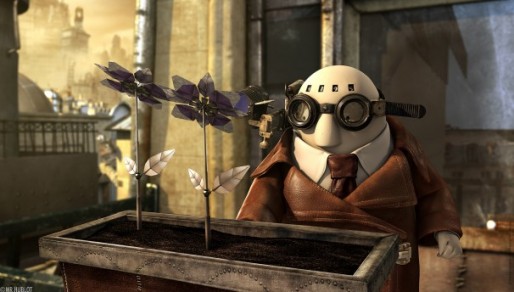 My favorite of the Oscar nominated shorts is Mr Hublot. instead of the expected winner, Room on the Broom. I love all aspects of the steampunk film, and I could watch this over and over again for both its story and its animation. The same is true for me in the Highly Commended trio for à la Française. Chickens at Versailles?! Absolutely! This short cries out for sequels with the same chicken characters at other settings throughout time.