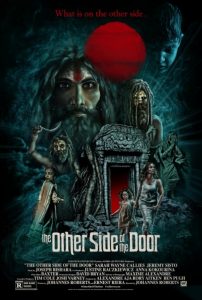 Vengeful ghosts are familiar entities in Asian horror films with series like The Grudge and The Ring. The origin of some of these spirits is as much a part of the culture as it is the writer’s mind. You know exactly what to expect with these series — lots of pale, screaming spirits and bizarre situations. The newest in a long line of similar ghost stories arrives with The Other Side of the Door. Its title brings to mind slasher flicks of the ‘70s and ‘80s, but this is nothing like that genre. Instead, this ambitious movie strives for something better and almost makes it. Mixing a fairly standard plot with Indian culture and settings, The Other Side of the Door invites you to cross the threshold and keeps you interested enough to not run for the nearest exit.

Cowriter/director Johannes Roberts and cowriter Ernest Riera use a small cast and a vibrant setting to tell their story. Michael (Jeremy Sisto) and Maria (Sarah Wayne Callies) are a young American couple with an antiques business of some sort in Mumbai, India. In a tragic accident, their son Oliver died, while Maria and their daughter Lucy (Sofia Rosinsky) survived. Maria can’t overcome her grief and blames herself daily for the loss. The family’s Indian housekeeper Piki (Suchitra Pillai-Malik) takes pity on Maria and tells her about an ancient abandoned temple where she can possibly find relief and closure. The line between life and death is thin there, and if Maria follows a ritual, she’ll be able to talk to her dead son one more time through the temple door… as long as she doesn’t open it. You know where this is headed. Break the rules, and bad things start to happen.

The cast is believable, and good actors make this film less hokey than it could have been. Sisto is rugged and strong against unknown forces, while Callies takes command of the movie as its lead. Fans of The Walking Dead will recognize Callies from her prominent role in the TV show. She certainly has the experience to deal with the dead, but in this case, it’s about reaching out to them rather than avoiding or destroying them. Pillai-Malik has that perfect blend of mystery and knowledge to portray the smartest one in the house who might have made the worst mistake by sharing her information with Maria. Rosinsky has big eyes and a huge mound of hair to make her look a little creepy as well as cute. Even the dog that plays family pet Winston reacts perfectly with growls and barks to the strange things that are going on.

This all sounds positive, and it mostly stays on that side of the line between bad and good. Roberts has lots of experience writing and directing horror films in recent years. That experience results in the mostly skillful pacing that leads to a rousing, tense finale. Where Roberts fails is some confusion with one plot point and relying a little too heavily on tired horror conventions. When I heard Piki’s warning about not opening the temple door, I imagined that Maria would not be allowed to enter the temple. In fact, it’s the reverse. She has to stay inside. That’s a minor difference, yet Roberts could have saved what Maria discovers inside the temple for a payoff rather than a prelude. I’m not a fan of cheap scares in horror films. Even younger moviegoers have seen these things enough and don’t respond as positively. Roberts throws in some screaming ghostly figures and characters coming into frame for jump scares, and those kinds of techniques turn me off.

The best parts of The Other Side of the Door are the setting and the plot points that involve Indian mysticism and spirituality. The temple is spooky on its own, and with a couple of older ladies staring at Maria in disbelief as she heads off into the woods to find it, it’s easy to generate that feeling of dread. If a couple of nearby villagers know to stay away from the woods, it’s probably best if you don’t go there. There are a number of crazy-looking, skeletal men who follow Maria and either protect or warn her, depending on the situation. I thought that the filmmakers created these characters. In fact, the Aghori are a real group of ritualists who hang out in graveyards, sometimes partake in cannibalism and smear themselves with ashes from cremations. There’s probably an entire movie that could be based on the Aghori, so it was a nice touch to include them here as subtext to the greater mysteries.

I didn’t expect much from a horror film released in the early months of the year, so I was pleasantly surprised. This is a watchable, mostly enjoyable experience that’s worth a peek if you need a fix of a ghost story. Who wouldn’t at least consider talking once more to a departed loved one? It would be worth the limitations for many of us, and a small minority might end up like the people in this fable. Much like the Stephen King classic Pet Sematary, the temptation to reach beyond the realms of death may be too great to resist. The Other Side of the Door could have had some better pacing and pushed the terror even further as an R-rated movie, yet the spooky situations and universal feelings that it evokes keep it firmly on the opposite side of boring. 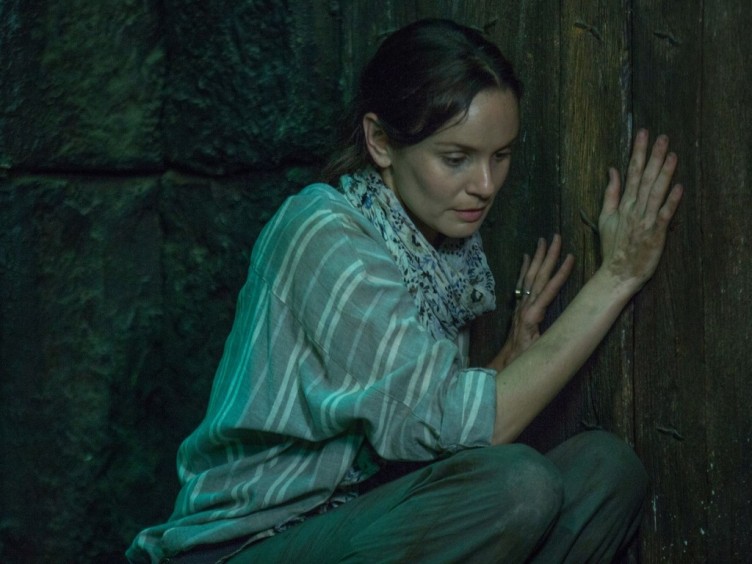