The potential long-term consequences of the choices we make come under the microscope in Derek Cianfrance‘s latest film, The Place Beyond the Pines. 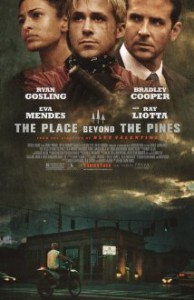 Luke Glanton (Ryan Gosling), a struggling motorcycle stunt rider, finds out that a past lover (Eve Mendes) has a baby boy that he fathered the year before. He decides that he has to take responsibility for the both of them. Lacking options, he embarks on a string of bank robberies until, one day, he runs into Officer Avery Cross (Bradley Cooper). Cross has his own wife and young son. Neither could have foreseen how their chance meeting that day would ripple through time and connect them inexorably.

This haunting story unfolds over 15 years and exposes us to two generations who have to deal with the domino effects of Luke’s well-meaning but misguided act of chivalry.  It is, at turns, a riveting story that slowly works its way under your skin and into the minds and motivations of all of the primary characters. Each of them comes to their own judgment day, in their own way, but realizing that the origins of all of them lead directly back to Luke.

The performances within The Place Beyond the Pines are at the heart of its power over the viewer. Without them, the film would be a disaster, but they shine. The secondary characters are handled equally well with Ray Liotta as one of Cooper’s coworkers and Ben Mendelsohn as one of Luke’s friends doing standout work.

The look and feel of the film give it an edgy, muted, nostalgic quality that lends itself well to the material. Many of the shots will immerse you fully into the action — even sometimes when, perhaps, you’d wish to be at a more safe distance.

If only that’s all a film needed. Unfortunately, the script is the one element that doesn’t seem up to the reliability of the rest of the project. As I said, it does have its moments, but those moments never last. We keep hitting plot points that simply don’t ring true, resulting in a jarring crash back to reality. Time and again, it manages to re-create the connection only to falter. This is compounded by a 141-minute running time that feels like much more.

There’s also a clear loss of focus and energy when the story jumps forward to the nearly grown sons. We understood Luke and Avery, but their sons get thrust at us without enough to really let us connect. We can, of course, infer much, but it still stands in stark contrast to how their fathers were handled.

In the end, we get an interesting movie with some truly moving moments, but it’s not enough to hold it all together. By the end, you’re a bit worn out, a bit bored and a bit lost on what the point was. Despite it all, the film still hangs with you.