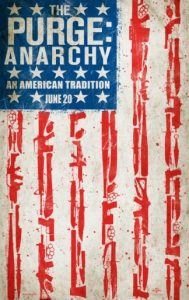 Four hapless citizens try to survive a single night of government-sanctioned lawlessness in The Purge: Anarchy.

In the near future, the weight of a growing population threatens the stability of the United States and its capacity to provide services to its citizens. In response, its leaders approved an annual 12-hour period of complete mayhem where anything goes, including mass murder. Citizens see it as a chance to right past wrongs or satiate their darkest desires. For the government, it’s a chance to “cull the herd” in the same way we declare open season on overpopulated wild animals.

At the start of this year’s event, a young couple, Shane (Zach Gilford) and Liz (Kiele Sanchez), find themselves stranded outside after their car mysteriously breaks down. Meanwhile, mother and daughter Eva (Carmen Ejogo) and Cali (Zoë Soul) are forced to take to the deadly streets after barely escaping from a nefarious group of organized militants. The four manage to get help from a well-armed police sergeant, Leo Barnes (Frank Grillo), whose only desire is to take revenge on the man responsible for his son’s death. 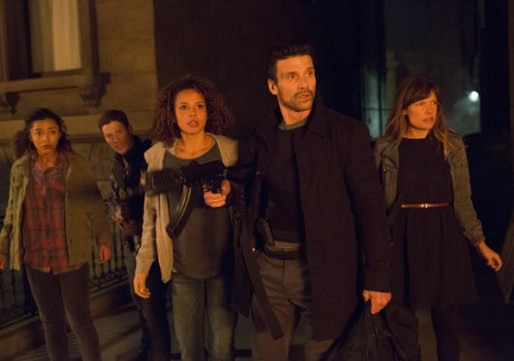 This is the sequel to 2013’s surprise success The Purge. The original film, heavily panned by critics, was made for a paltry $3 million but managed to take in nearly $90 million, assuring this film’s inevitable production. Director James DeMonaco returns with a larger budget, an unknown (but fairly respectable) cast and a much larger landscape. This time around, we get a story that feels more believable and provides a number of darker plot points that keep the tension near the breaking point throughout.

When it comes right down to it, the plot is entirely nonsensical. No advanced civilization would ever willingly adopt such a ludicrous concept. No one would be able to trust anyone under such circumstances. The slightest wrong look could be enough to trigger complete chaos. Perhaps your mother-in-law feels that you’re not good enough for her beloved child. Is that enough for her to poison you? Maybe you’re just paranoid about it, but you can’t take any chances. Maybe she knows you’re paranoid about it, and likewise, she can’t take any chances. Does your best friend covet your car, your spouse or even just your iPad? The combinations are endless. There’s the obvious question: Why would anyone with any transportation option stick around for the 12 hours? Head off to Canada or Mexico for the day. Again, this is not a story that will stand up to even the smallest hint of logic. It’s a small miracle that DeMonaco succeeds in getting us to set that aside just long enough to enjoy the ride.

It goes without saying that viewers should expect a level of debauchery likely to make some of them uncomfortable. The violence is highly graphic and, at times, unsettling. If you can turn off your sensibilities for a short while, this guilty pleasure might just make you squirm and jump enough to quell your naughty side for another year.