I’m just back from several weekends in Ocean City and finally caught a movie I’ve wanted to see for a while at the local Rave movie theater. The film is the independent documentary called The Queen of Versailles. 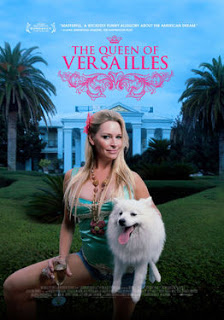 The movie tells the story of the Siegel family; David, Jackie and their seven kids, dogs, assorted staff and business. The Siegel’s are billionaires living the good life on the back of the hard work David put into creating the largest time share company in the world.

The film focuses most closely on David’s wife Jackie. Everything about their relationship looks stereotypical. First, there’s 31 years between them. Second, Jackie is a former model and Mrs. Florida winner. She also has no issues with any sort of cosmetic enhancement including a pair of extremely distracting breasts that she shows off with virtually every chosen outfit. She seems the definition of a trophy wife.

We get invited into their view of normal daily life. Of course, to the average viewer, it’s anything but normal. What we mainly see is a display of incredible consumption. Jackie tells us, “I have a $17,000 pair of Gucci crocodile boots.”

She also points out how “cramped” they are in a 29,000 square-foot house and are well on the way to building what we’re told is the largest single-family home in America under one roof at 90,000 square feet. It boasts a bowling alley, ice rink, two tennis courts, 17 bathrooms and more (actually it’s the second-largest house with the first being nearly twice its size).

Along the way their success story crumbles with the Wall Street crash of 2008 and suddenly the family is forced into a way of life and decisions that they haven’t had to deal with in ages. Both Jackie and David came from more normal backgrounds but after jet-setting around the world adjustments are apt to be shocking.

We also get to see, first-hand, the impact this sudden turn of events has on their marriage. When the movie starts David tells the interviewer, “I don’t know what she sees in me.” (I have a sneaking suspicion that money might play a role.) By the end of the film they’re barely on speaking terms.

The most interesting part of the film is that the producers manage to pull off the seemingly impossible task of making the viewer feel sorry for the uber-rich. It underscores how anxiety isn’t limited to just those without deep pockets. You worry about feeding your kids while David has to worry about destroying the lives of the thousands he has to lay off.

The first third of the movie is riveting. Once it reaches the middle third it begins to get bogged down in minutia that we’ve already anticipated. It also starts to expose “the man behind the curtain”. That is, several parts of the documentary don’t quite feel genuine. There are several scenes that feel entirely staged for our benefit and they detract from the goal of the film.

We’re supposed to believe that the producers intended to tell us a different story than what we end up with. They suggest they set out to tell us a story about the dramatic differences in the daily lives of people so incredibly successful but just happened to be around to watch a riches-to-rags story unfold that had to be told. Instead, you realize, the latter is what they had in mind the entire time and the rest is just obfuscation.

For example, there’s a scene where Jackie is forced to get herself to a friend’s house in another city and has to rent a car at the airport. She awkwardly asks the representative, “Who will be my driver?” The suggestion is that she has no idea that rental cars are driven by the renter but yet the movie forgets that we’ve been told of the meager beginnings of the couple. Later, when she explains that her kids want to know who all those people are on their plane, we believe it because Jackie presents it in a genuine way. It’s also entirely plausible that the kids wouldn’t have been exposed to such common experiences.

One thing that cannot be ignored is David’s life. Here’s a man worth billions who seems entirely dissatisfied with life. He’s always irascible, grumpy and, quite frankly, sad. I’ve read about this situation countless times. It’s very difficult to earn the kind of money David has without having the kind of personality that cannot enjoy it. He works 24/7 and can never turn it off. He and Jackie seem to exist on different planes and, I suspect, very little love really exists between them.

The film itself  ends abruptly without the biggest questions answered. Looking online provides those answers but I’m left to wonder why the film didn’t provide them. Is it because those answers weren’t known at the time or because the producers wanted to tell an entirely different story whose real ending didn’t match the desired plot?