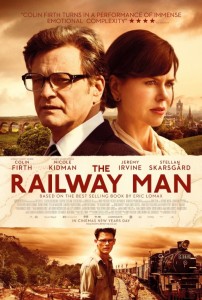 A former British prisoner of war struggles to find peace of mind after finding the love of his life in The Railway Man.

Eric Lomax (Colin Firth) is obsessed with all things train related. He knows every timetable, every route and every type of locomotive. One day in the 1960s, while traveling in a dining car, he meets a compelling stranger named Patti (Nicole Kidman) and finds himself drawn to her. Their chemistry is so undeniable that “happily ever after” seems a foregone conclusion. Unfortunately for her, Eric isn’t all who he seems. He harbors a deep, dark secret that’s been held just below the surface for a very long, very exhausting time.

Lomax, as a soldier in the British army during World War II, found himself stationed in far-off Singapore. In February 1942, the Japanese army routed the British, resulting in the largest surrender in their famed history. Lomax and his unit were immediately shipped off to Burma where he was used as slave labor to build the infamous Death Railway, later made famous in the 1957 film Bridge on the River Kwai. He and his fellow prisoners endured unspeakable acts of torture at the hands of the Japanese. The experience left him a broken man, dealing with what we now call Post Traumatic Stress Disorder (PTSD). In those days, it was anything but understood. Sufferers were often left to fend for themselves and urged to simply never speak of the incidents again. 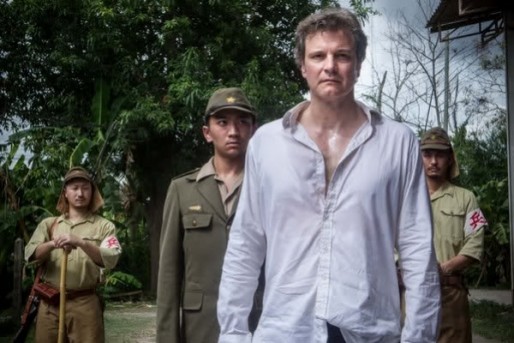 The film, directed by Jonathan Teplitzky, is based on Lomax’s autobiography of the same name. Unlike many similar stories about wartime atrocities, this one takes us directly inside the mind of a single prisoner to get a real sense of the deep, personal struggle within. Its approach only slowly exposes us to the horrors that drive him. It’s a style that comes at a cost. Throughout half of the film, you’re left to wonder what the big deal is. When it finally does deliver, the introspection feels like an unyielding vice grip continually being tightened.

Firth and Kidman are wonderful in their roles. They’re joined by powerful performances from Stellan Skarsgård as Eric’s friend Finlay and Hiroyuki Sanada as a retired Japanese officer. Unfortunately, the drawn-out story is sure to leave many behind. It also has a distracting tendency to bounce around early, growing more exaggerated as the plot thickens.

On the whole, this is an insidiously invasive and effective film that, despite its flaws, demonstrates the enduring spirit of mankind.