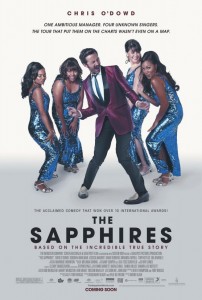 Most movies that have some basis in fact twist the history a little for more dramatic effect or simply to make a more enjoyable experience. For historical dramas, this technique tends to misinform moviegoers who don’t already know the real history. Imagine how many people will now think of Abraham Lincoln as represented in Lincoln as opposed to, say, Abraham Lincoln: Vampire Hunter. For comedies and musicals, things are a little more relaxed. Facts and history sometimes receive a broad treatment. I was pleasantly surprised by a delightful, uplifting comedy called The Sapphires. It’s a cinematic version of true events that benefits from both this type of embellishment and the creation of a male lead where there really was no such person in the true story. I had never heard about a group of Aboriginal young ladies going to Vietnam to sing for the American troops, but if that simple description grabs your attention, The Sapphires will satisfy your curiosity.

The Sapphires originated as a stage play by the film’s cowriter, Tony Briggs, an actor and writer who based the play on the experiences of his mother, Laurel Robinson, a member of the real group. Director Wayne Blair and cowriter Keith Thompson (writer of Introducing the Dwights) have a lot of experience in Australian TV, a background that shows in the quick bursts of comedy and music that saturate the film. There are a few serious scenes in The Sapphires, and the first scenes set the tone for the movie as it reveals some of the issues related to Aboriginal rights. Native Australians were forced into missions with rough conditions, and to make things worse, lighter-skinned children were taken away and raised as white elsewhere. The Sapphires opens with four girls singing for their friends and family at their mission when one of the girls is taken away because of the light color of her skin. Years later, three sisters Cynthia (Miranda Tapsell), Gail (Deborah Mailman) and Julie (Jessica Mauboy) perform at the mission and in town as the Commeragunja Songbirds. They sing country and western music like Merle Haggard, but broke DJ and talent show coordinator Dave Lovelace (Chris O’Dowd of Bridesmaids and This is 40) sees something more in them and plans to make them into the Australian Aboriginal version of The Supremes.

The thrust of the film is that Dave hears about a call for performers for the U.S. troops in Vietnam and thinks that the three sisters are his ticket out of town and a path toward success and/or fame. It’s 1968, and the soldiers certainly need some entertainment to take them away for a little while from all of that misery. Irish actor O’Dowd has perfect comedic timing in The Sapphires, and Dave’s wisecracks and efforts to deal with the sisters are half of the film’s comedy and entertainment. The other half is made up of the wonderful musical numbers. Dave prods the girls to sing soul and R&B songs because they’re popular at the time. The resulting songs include “I Heard It Through the Grapevine,” “I Can’t Help Myself (Sugar Pie Honey Bunch),“ “I’ll Take You There” and other classics, mostly sung by Mauboy, runner-up contestant in the fourth season of Australian Idol. Julie initially stays behind when the sisters go to Melbourne with Dave to audition for the armed forces. She has a child, and their parents want her to stick around. Gail is the leader of the sisters and lead singer, but Dave puts Julie in the lead position after she sneaks out to join the group, now reunited with cousin Kay (Shari Sebbens) who they look up in Melbourne and convince to audition.

The Sapphires is great when it sticks to the music and comedy. I enjoyed the interaction of the characters, particularly the banter between Dave and Gail. Cynthia is the boy crazy sister, and she flirts with all of the guys in Vietnam despite having a young man interested in her back home. The later production numbers are fabulous even though they’re on makeshift stages in the middle of a combat zone. The sequined costumes and bright colors certainly put the group in the same league as other girl groups of the time. In addition to Mauboy’s singing experience, Mailman actually starred in the play as Cynthia instead of Gail. Both Mauboy and Mailman also appeared in the film Bran Nue Dae, a film adaptation of a 1990 musical set in 1969. Some of the scenes in Vietnam come off as silly or forced, especially during an attack on the base. It says something for the story and the performers that I didn’t want the battles to interrupt the musical numbers, but I guess I couldn’t entirely get through the movie without the war’s intrusion.

I’m most surprised that I didn’t hear or see more about The Sapphires. It’s the kind of feel-good movie that should pack the theaters. It’s a solid, good movie that will get you to laugh and smile in a sort of road trip meshed with a musical comedy. O’Dowd won me over from his first scene, and I loved the songs picked for the ladies to sing even if they lip-synched during the filming or were later dubbed. This is one of those shared experiences that works great in a theater; the laughter and enjoyment are contagious. The story of the real women loosely represented in the play and film may not have the spectacle of those presentations, but I guarantee it’s as inspiring. The Sapphires is the Vietnam story you never heard before, and it’s the most unusual Vietnam movie you’re likely to see anytime soon.