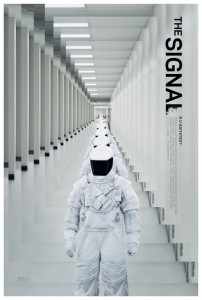 Three college friends head off to catch a computer hacker and find themselves forever changed by their incomprehensible fate in The Signal.

Nic Eastman (Brenton Thwaites) and Jonah Breck (Beau Knapp) are freshmen computer geeks from MIT. They’ve recently been captivated by the exploits of a new, renowned hacker who broke into MIT’s network. When the hacker, who goes by the name Nomad, starts to go after the two students, they decide to turn the tables on Nomad and track him down first. They pick up Nic’s girlfriend Haley (Olivia Cooke) and head to a location from which they’re certain Nomad’s operating. Once there, they find a derelict building with no sign of their stalker after which the lights literally and figuratively go out. When Nic awakes, he finds himself in a situation that’s beyond his comprehension with no clear path of escape.

This nightmarish sci-fi thriller is the second film from director William Eubank, who previously directed another sci-fi thriller (2011’s Love) that barely managed to get screened. Eubank gives us a setting that’s absolutely first-rate. The look of the film transitions effortlessly between dirty, portentous darkness and menacing, sterilized brightness. The stark imagery, including surreal dream sequences and disconcerting violence, leaves the viewer on edge for much of the film. There’s no denying that this is one creepy journey. It has a style that reminded me of two 2012 films, The Cabin in the Woods and Chronicle. They also feature a fairly fresh cast facing unknown, otherworldly challenges that need to be overcome. 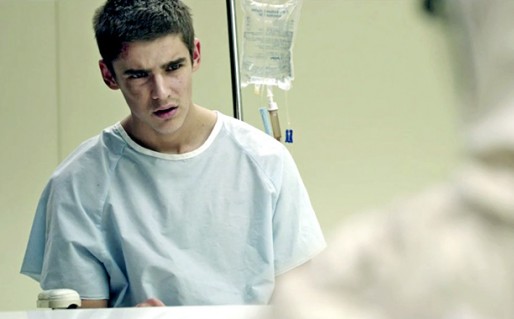 The younger stars all handle their roles in workable fashion while getting a nice supporting effort from master of mayhem Laurence Fishburne. Any character that finds himself face-to-face with a Fishburne character can bet that their world is about to be turned inside out.

Unfortunately, the film doesn’t seem to know what to do with all that pent-up anxiety. Once the big secret is revealed, all that pressure lets loose like a newly-popped, noisy beach ball. It’s as if the original writers were fired mid-film and replaced with a new group who despised everything that came before but lacked the time to do anything about it. From that point forward, we get countless overdone CGI effects, implausible plot choices and even more bizarre reveals that leave far too many questions on the table.

As a viewer, the film treats us all like lab rats tossed into an unfamiliar maze and searching for a lump of cheese. Once the credits roll, you have to accept the fact that there never was any cheese.