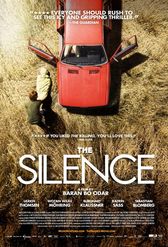 Emotional remnants are the sign of an impactful film. How many times have you left a theater and forgot most of a movie by the time you make it to a bar or restaurant? Could you say the same for a film like Schindler’s List? Love it or hate it, that Steven Spielberg drama left you sad and wounded as if you just left a war zone. The Silence is that kind of a movie. You will feel emotionally drained and defeated by the end, yet it’s still a magnificent combination of thriller, drama and police investigation. The Silence took me by surprise when I knew little or nothing about it, so allow me to share this gem with you.

The German title of The Silence is Das letzte Schweigen, which roughly translates to The Last Silence or The Latest Silence, slightly different than the title (Das Schweigen) of the Jan Costin Wagner novel from which it is adapted. Writer/director Baran bo Odar does a wonderful job considering the complicated narrative, two time periods and variety of locations, including a creepy carnival. In an interview, the filmmaker claimed to have been influenced by both Crime and Punishment by Fyodor Dostoyevsky and Lawrence of Arabia, particularly when Lawrence confesses that he was bothered not by killing but by discovering that he enjoyed the killing. That unsettling self-realization transfers well to The Silence as the killer goes about his life in a matter-of-fact way as if nothing happened while someone connected to him is crawling in his skin because of what happened. The complexities of the characters and plot twists and turns elevate The Silence above other thrillers.

The Silence wastes no time in delving immediately into the cesspool of humanity. There are no opening credits to ease you into the proceedings. The movie begins in 1986 with Peer Sommer (Ulrich Thomsen) and his friend Timo Friedrich (Wotan Wilke Mohring) driving along when Peer spots a 13-year-old girl named Pia (Helene Doppler) riding her bike through a wheat field. Peer stops the car to talk to the girl and drags her off into the field to rape her. He also accidentally kills her, which horrifies Timo and drives him away from Peer. I like how the movie doesn’t keep the facts about this murder from the audience and instead shifts the focus on the work of the investigators both in 1986 and 23 years later when another girl named Sinikka (Anna-Lena Klenke) goes missing. We see a car slow down to follow Sinikka. Is it Peer giving in to his impulses or someone else entirely? Will Sinikka be saved, or is the search for her fruitless? That mystery gnaws at you over the course of the film as it does the police detectives.

The film concentrates on the activities of two groups of people — the police and the families of the missing girls. David Jahn (Sebastian Blomberg) returns from a leave of absence in time for the retirement party of Krischan Mittich (Burghart Klaussner), the investigator of the original murder who never solved the crime. Jana Glaser (Jule Bowe) is pregnant during the search for Sinikka but still manages to help David track down clues under incredible pressure from the community. David and Jana’s boss, Matthias Grimmer (Oliver Stokowski), is a jerk who doesn’t help the investigation in any real way. While the cops go about their work, the families are in agony. Elena Lange (Katrin Sass) is Pia’s mother, and she has never really gotten over Pia’s senseless, brutal death. She offers moral support to Sinikka’s parents, Ruth Weghamm (Karoline Eichhorn) and Karl Weghamm (Roeland Wiesnekker), who agonize over the argument they had with Sinikka right before her disappearance. The narrative mostly stays in the present, but there are clues in the past in the form of character points and crime details. Odar juggles all of this carefully for a plot that slowly reveals what you need to know.

The actors convinced me on all levels, which made The Silence feel a lot like a documentary rather than a feature film. Thomsen is simultaneously likable and detestable, so it’s easy to see how Peer was able to blend back into the suburban community after killing Pia. Mohring and Blomberg deliver complicated, tortured characters with different motives driving them — Timo’s guilt and David’s grief — that are also intertwined with Sinikka’s disappearance. Klaussner’s performance is almost like that of Thomsen. He’s avuncular and jolly on the outside and haunted on the inside. Sass wears Elena’s pain on her face in every scene and almost never shows a moment’s peace. Watching these actors work is like seeing seasoned performers in a stage play. Their characters are the culmination of balanced plot, dialogue and acting, each of which excels in The Silence.

Odar makes some artistic choices that positively affect the look and feel of The Silence. The houses of the suburban neighborhood have striking colors, and the day scenes are often sunny and bright. The murder in the field takes place on a bright day in contrast to the dark act that’s central to that time period. Unlike Pia’s experience, Sinikka disappears at night after spending time at a carnival. This setting offers a perfect balance to the movie. I only wish that the carnival featured more prominently because I have always thought that funhouses and mirror mazes are just perfect for horror movies or thrillers. Another technique that Odar employs almost relegates the film and its characters to a storybook feel. There are many high angles of outdoor scenes that give the impression of not noticing the imperfections in the scenes until you zoom in closer. Odar described these views as if someone were watching pieces on a chessboard. In both cases, it’s a simple dramatic effect that fits the movie perfectly.

I liked The Silence so much that I saw it twice. Knowing the plot did not ruin the experience for me the second time because of the acting, pacing and wonderful touches that Odar adds to his film. The Silence is not a happy movie. It’s intense and moving, and by the end, you’ll feel dirty and disgusted at both the errors and crimes committed by the characters. I liken the experience to watching the first version of The Girl with the Dragon Tattoo. Layers get peeled back over the course of the film to reveal the sins of its characters underneath all while a mystery needs to get solved. I was hooked from the start, and I look forward to Odar’s next film.