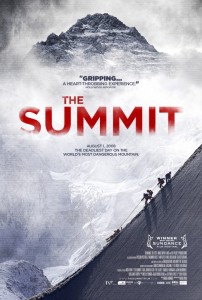 A group of real-life climbers reach the top of K2 only to realize the most difficult part of their journey lies ahead in The Summit.

In August of 2008, 18 climbers realized a dream by reaching the summit of one of the deadliest mountains in the world — K2. However, it’s the treacherous descent where most fatalities occur. This mix of documentary and drama tries to piece together the events of those few days on K2 when 11 climbers would tragically lose their lives.

From its opening scenes, the imagery and story are just spellbinding. We immediately connect with the magnetic nature of this untamed beast through a wonderful array of majestic shots that leave the audience breathless. Through interviews with survivors and their families, we come to know each of the major players intimately.

The producers also introduce a compelling twist that only adds to the mystique of the story. They include interview footage from revered Italian climber Walter Bonatti, who was on the first team to successfully reach K2′s summit in 1954. His sage, seasoned commentary echoes through the film acting as its consciousness — always whispering to us to tread carefully.

When the film is good, it’s absolutely stunning. Unfortunately, it’s marred in several places by poor production values and choices that keep it from being the polished gem it could have been. The biggest problem is that it takes quite some time to understand who’s who. Characters are thrust upon us with little sense of introduction, and the depth of people involved only magnifies the problem. Worse than that, many of them have very strong accents. The film does include subtitles but then eschews them for some people where they’re just as necessary.

There are many seamlessly blended shots mixing real footage with re-creations, and the effect is, oddly, too seamless. You’re not quite sure when you’re watching one or the other, and it’s a bit disturbing.

When the film resorts to graphics or background, it’s done haphazardly. We’re shown an MRI of a brain and lungs while being told about the impacts of high-elevation climbing, but nothing is pointed out on the shots themselves to make the case. One essential plot point involves a major player who perished. The producers cover the details of his death — with a graphic — so quickly that you’re in danger of missing it entirely if you look away for an instant. 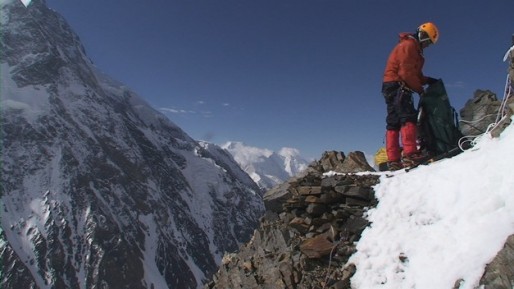 You also get the feel that we’re getting a rendition of the events that might possibly be a bit one-sided.

Make no mistake — this is a riveting film that will leave you feeling drained and in utter awe of the mountain. You’ll leave the theater with a much deeper understanding of the risks involved but also a better sense of why people take them in the first place. Any film that can chill you to the bone while sitting safely in your theater seat is doing something right, and this one will leave you fearing imminent frostbite.