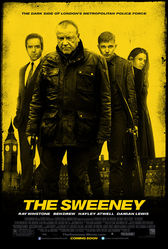 I’m a big fan of police dramas. Movies like Heat and The Departed work well if the characters are developed and the plot is deep enough to draw you in but not so complicated that you need a scorecard. I was taken by surprise by the recent import from England called The Sweeney. It’s a film adaptation of the popular ‘70s UK TV show that ran from 1975 to 1978. It probably received a limited release stateside because Yanks aren’t familiar with the source material. It’s not like porting a property akin to Doctor Who that everyone knows. This lower visibility is a shame because people will miss out on a smartly crafted, exciting cop drama with a great cast and solid action sequences.

The Sweeney is the nickname of the “Flying Squad” of London’s Metropolitan Police Service, a group that investigates armed robberies and tries to ambush suspects based on intelligence before they commit crimes. It’s a name derived in Cockney rhyming slang that rhymes “Flying Squad” with “Sweeney Todd” and shortens it to “The Sweeney.” Without that explanation or knowledge, most Americans would have no idea what the title means. Perhaps that also hurts the movie’s prospects over here. Cowriter/director Nick Love (writer/director of Outlaw) and cowriter John Hodge (writer of The Beach and Trainspotting) manage to introduce you to a group of detectives and cops with a bust that opens the film and then successfully transition into the main plot of the film. This foiled robbery and the pub celebration that follows tell you all that you need to know about the main characters by watching their actions instead of lengthy expository dialogue.

Detective Inspector (DI) Jack Regan (Ray Winstone) leads The Sweeney and resorts to banging heads and sometimes crossing the line to get results. His boss, Detective Chief Inspector (DCI) Frank Haskins (Damian Lewis of Homeland) looks the other way, but DCI Ivan Lewis (Steven Mackintosh) of Internal Affairs is determined to bring down Regan and his unit because of complaints and their internal costs. Lewis would likely be even more aggressive if he knew about the affair that Regan is having with his wife, Detective Constable (DC) Nancy Lewis (Hayley Atwell of Brideshead Revisited and Captain America: The First Avenger), a member of Regan’s squad. Regan has a number of trusted individuals in his employ, especially right-hand man DC George Carter (Ben Drew). Regan’s tagline when he takes down a bad guy is “You’re nicked!” Regan and his unit are tasked with investigating a jewelry store robbery that turns into a murder of a seemingly innocent bystander. Upon digging deeper, Regan finds a connection between the robbery, longtime enemy Francis Allen (Paul Anderson) and Serbian hood Makin Trebolt (Kevin Michaels).

Winstone is gritty and real — quite perfect for the leading The Sweeney. Drew impresses despite being an unfamiliar face to American audiences. Atwell mixes the toughness and emotional vulnerability of her character quite nicely. It’s a shame that Lewis didn’t have a larger role and much more to do than frown at Regan and cover up his missteps. Veteran British actor Alan Ford appears all too briefly as an informant named Harry. If you blink, you might miss Allan Corduner as a doctor. The biggest problem with the ride range of acting talent is the wide range of accents that goes along with them. This movie desperately needs subtitles, especially in fast-paced conversations. The new film by Ken Loach, The Angels’ Share, supplies subtitles, but it’s possible that they were added because the Loach film was intended for worldwide distribution and The Sweeney was not. I can’t say for sure, but I do find it very frustrating to miss jokes because I don’t hear the words properly.

The Sweeney has a good supply of action scenes and a couple of major shootouts. The action all feels gritty and realistic. The car chases don’t result in flying cars and other silly stunts that you would find in a Bruce Willis movie. Similarly, the gun battles result in messy injuries and a lot of missed shots. A sequence in Trafalgar Square seems like news footage caught of a shooting spree in action. Another part that takes place in a Gravesend marina mixes the seedy and the dangerous atmosphere of the seaside town with the exchange between cops and robbers. I was greatly impressed with the music by Lorne Balfe, who produced the music for the Assassin’s Creed III video game. The soaring theme is both haunting and sad, and it convinced me to hunt down the soundtrack. It’s one of those scores that complements the movie so well and can’t exist so much without it. The music from John Carpenter for Halloween has the same intertwined nature.

There are many layers to The Sweeney and some unexpected plot twists and turns that elevate it above standard cop dramas. The effort put into this movie should probably lead to a sequel, but I’m not sure if one is in the works. I could stand to watch Winstone and crew investigate another major heist. With some minor tweaks, The Sweeney would be ready for a wider audience. Instead, this 2012 film was dumped to theaters for a week or two. Seek out The Sweeney, and you’ll share in my surprise and enjoyment.