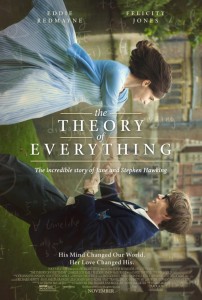 A socially awkward, brilliant doctoral student meets the girl of his dreams before facing a life-changing illness in The Theory of Everything.

While studying at Cambridge in 1963, 21-year-old Stephen Hawking (Eddie Redmayne) had begun to make a mark among both his professors and his peers. He was already showing an academic level of talent that would one day skyrocket him to international fame. None of it seemed to matter to him once he met Jane Wilde (Felicity Jones). Young, beautiful and also bright in her own right, Jane seemed entirely oblivious to Hawking’s clumsy social demeanor. She was fascinated by Hawking’s intellect, while he was captivated by her fascination in him. The two became an instant item.

As their romance began to blossom, Hawking’s health suddenly became a concern. He began to find it difficult to write, talk or even walk without incredible effort. Just as the stars seemed to be shining down upon him, he received the worst news imaginable. He had motor neuron disease — an ailment related to ALS, also known as Lou Gehrig’s Disease. The outlook was grim. Doctors gave him two years to live. He began to give up on everything that he’d worked so hard to gain, including Jane. However, she wouldn’t accept his giving up and convinced him that, together, the two would make the very best of whatever time he had left. It was the perfect message at the perfect moment for Hawking. He rebounded, refocused and began to comprehend time with a clarity and depth that no one before him had ever done. 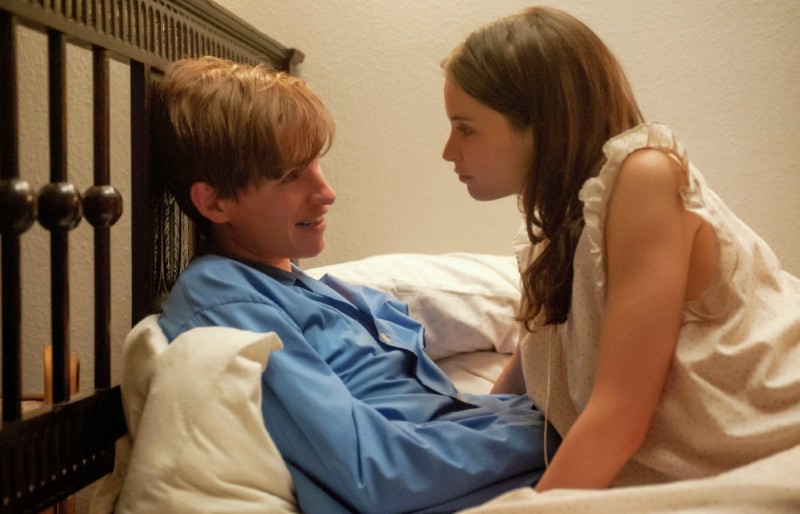 This beautifully shot and flawlessly acted biopic gives us some insight into the background of a man whom most of us only know as that brilliant guy in a wheelchair who speaks with the aid of a computer. Unfortunately, it’s a very uneven effort that seems intent on staying true to its overly proper British roots. It steadfastly insists on keeping us at arm’s length on any part of his life. This is most likely due to the origin of the story — Jane’s book on their lives. She’s conservative, private and religious — not exactly the most reliable recipe for a riveting tell-all tale. We get glimpses — only fleeting ones — into their lives. We meet Hawking when he’s already showing signs of the ailment that will soon cripple him physically. We never find out why doctors were so wrong about his prognosis. As far as we can see, Hawking doesn’t even question what’s happening to him. We also never get a chance to completely understand the inner workings of the characters. Their most important decisions and reactions often seem to materialize out of thin air.

Redmayne does a spot-on impression of Hawking throughout. Every facial expression seems perfectly practiced and delivered. It’s a performance that’s sure to draw award talk. Jones is even better, but sadly, her casting is also a distraction. She’s simply too attractive to ignore the disconnect in their appearances. The real Jane was simply average-looking. Why is that important? Imagine watching a rendition of the The Princess and the Frog without the story ever referencing their blatantly obvious differences.

There’s also a curious performance from Emily Watson as Jane’s mother. It’s noteworthy only for its shocking brevity. I can only assume that most of her work ended up on the cutting room floor. Blink and you run the risk of missing it. Most surprising of all is that, for a film about a man who understands time better than anyone, we get absolutely no sense of it during the film. Days and years pass interchangeably.

The film is not without its moments. Now and again, it manages to touch our hearts, especially during its closing act. Had we been allowed to see just a bit deeper behind the curtain, this could have been a love story for the ages.  Instead, it turns out to just be another curiously brief shooting star.