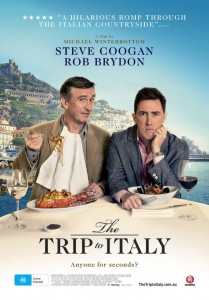 Two old friends are paid to reunite for an Italian restaurant tour in The Trip to Italy.

In 2010, comedian Steve Coogan (playing himself) took on an assignment to tour a number of restaurants in northern England. When his chosen compatriot for the trip backed out, Coogan reluctantly agreed to bring along fellow comedian and tenuous friend Rob Brydon (also playing himself). Their original endeavor went over well enough that the paper convinced them to team up once again, this time for a picturesque restaurant tour across Italy.

The two travel liberally through Liguria, Tuscany, Rome, Amalfi and Capri, stopping in each locale for mouthwatering meals and highly-regarded wines, all accentuated by their own eclectic banter. While outwardly friendly, the two can’t help but try to one-up each other with every interaction, especially when a potential conquest is within earshot. As the more successful of the two men, Coogan wants nothing more than for Brydon to recognize his higher stature and act accordingly. Of course, Brydon loves reminding Coogan that he’s not really all that famous. 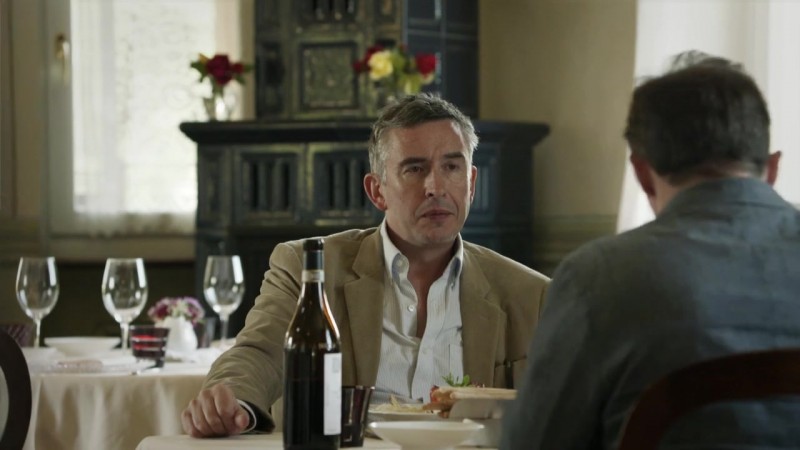 As with 2010’s The Trip, this latest film is reedited from a TV series of the same name. Coogan and Brydon parody their own personas, which we mainly experience through a series of repetitive routines. I’m not a fan of Coogan’s comedy, and like most Americans, I only became aware of him when he played the bad-luck director in 2008’s very funny Tropic Thunder. Also, like most Americans — based on box office results — I found him entirely unfunny in his last film, Alan Partridge.

For most of its 108 minutes, Coogan and Brydon perform a variation on a typical stand-up routine. The key difference here is that, instead of standing, they’re driving, walking, sailing or, most often, sitting down to a meal. Their spontaneous schtick is top heavy with pedestrian impressions, a few of which I still have no idea about. That’s the film. Viewers will know within the first few minutes if this is their cup of tea. If you don’t find yourself laughing by then, expecting things to improve is a guaranteed plan for nothing but disappointment.

If the Oscars had an award for Best Random Restaurant Kitchen Shots, this would be an absolute lock. The way it’s presented gives the impression that the director hated every ounce of the plot — the duo being at that location for the food — and only begrudgingly acknowledged it in the briefest possible way. If so, mission accomplished!

This is one dialogue-heavy, surprisingly unfunny — though quite visually appealing — trip to nowhere.