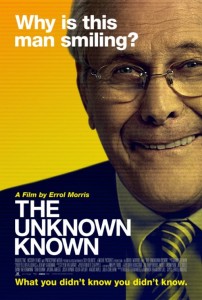 The controversial former Secretary of Defense sits down for a candid one-on-one interview in The Unknown Known.

The administration of President George W. Bush will forever conjure up images of three main players: Bush, Vice President Dick Cheney and Secretary of Defense Donald Rumsfeld. Rumsfeld has a history in politics dating back to the Dwight Eisenhower administration in the late 1950s. He worked for three Presidents (Richard Nixon, Gerald Ford and Bush) while holding the distinction of being the youngest and oldest person to have ever served as Defense Secretary. He’s considered the chief architect of the response to the 9/11 attacks, which led directly to our involvement in wars in Iraq and Afghanistan. His support of enhanced interrogation techniques for enemy combatants, believed by many to be torture, at Abu Ghraib and elsewhere led to diminished political support and his eventual resignation in 2006.

Famed filmmaker Errol Morris interviewed Rumsfeld for his latest documentary, surprisingly dedicated to film critic Roger Ebert. Morris clearly hoped to repeat the success of 2003’s The Fog of War, which focused on the life of Robert S. McNamara, the Secretary of Defense under John F. Kennedy and Lyndon Johnson and architect of the Vietnam War. That engaging film, which earned Morris the Academy Award for Best Documentary Feature, laid open a man who has long since struggled with the true cost of his actions. Would the same hold true for Rumsfeld? 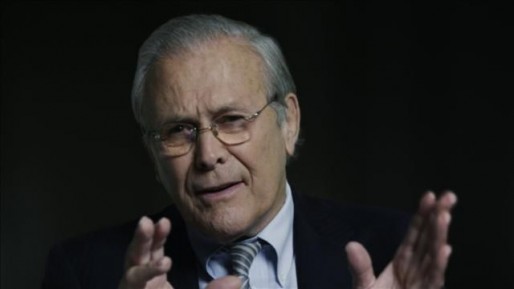 Throughout the 103 minutes, Morris covers the entirety of Rumsfeld’s storied career, including a brief moment in time when a Rumsfeld Presidency seemed quite possible. Early on, the film humanizes the Secretary, giving the audience a more down-to-earth understanding of the figure who was — and remains — revered and reviled. As the interview continues, we realize that Rumsfeld is entirely different from McNamara. There seem to be no second-guessing, no questioning and no forthcoming apologies. Even when the subject turns to clear mistakes, Rumsfeld is entirely unrepentant, as was the case when discussing the misguided, dominating attack on Dora Farms. The mission, intended to take out Saddam Hussein, instead injured 14 people (mostly women) and killed one civilian. It was later revealed that Hussein hadn’t been at the location since 1995.

Rumsfeld, it turns out, is a man of many words but little insight. A lifetime in politics has sharpened his ability to vanish in a snowstorm of meaningless verbiage. The film sheds very little new light on its subject. It feels like a chess match between two world-class masters with Rumsfeld emerging as the clear victor.