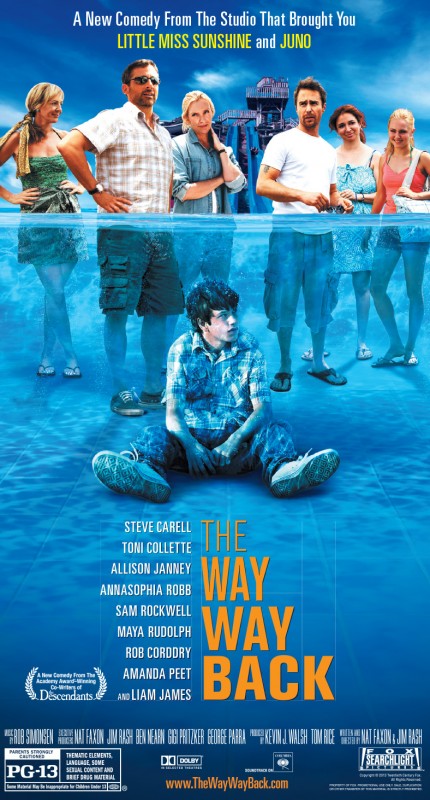 I was 14 years old in the summer of 1981 following my freshman year in high school. I had started to discover who I am and had already established my interest in computers and programming courtesy of the terminals we used to connect to a university’s mainframe computer via a telephone line. I went to an all-boys prep school, so I had no interaction with girls my age except for the occasional high school dances, and if you had asked me to rank myself as a person, I would probably have given myself a 5 or 6 because I still dealt with confidence issues and bullies. The Way, Way Back begins with a 14-year-old boy not unlike many of us guys at that age prodded to rank himself by a verbally and mentally abusive boyfriend to his mother. Over the course of this wonderful movie, lessons are learned and stands are made as this boy starts his transformation into a man who’s sure that he’s worth more than a number. The Way, Way Back has a perfect blend of drama and comedy and rises to be a near-perfect coming-of-age film set during one of those key summers when life changes for the better.

The Way, Way Back started as just The Way Back, but its title was altered because of the conflict with another movie of the same name. Triple-threat writers/directors/actors Nat Faxon and Jim Rash — the only duo I know who perform these three roles so well in the same movie — are also the cowriters of The Descendants. Common to both movies are the honest emotions and personal triumphs of the main characters. It doesn’t hurt that the acting is quite good, too, even in the smaller roles. The title refers to the seat in a station wagon that faces backwards in the back of the vehicle. This is where Duncan (Liam James) is sitting when his mother’s boyfriend Trent (Steve Carell) asks him to rank himself. Duncan, Trent, Duncan’s mother Pam (Toni Collette) and Trent’s daughter Steph (Zoe Levin) are on the way to the New England shore house owned by Trent. They plan to stay all summer, and Trent hopes that Duncan will raise his score. This scenario actually happened with Rash and his stepfather, so you never know what will be the seed for a movie plot.

Although Duncan is really the central character of the story, the people around him affect him greatly in ways they can’t even imagine. Chief among these people is Owen (Sam Rockwell), a man-child who takes Duncan under his wing and teaches him about life, work, love, friends and standing up for himself. Duncan’s father has run off after trading in Pam for a younger model, so Owen becomes the only father figure in his life. It certainly won’t be Trent. Susanna (AnnaSophia Robb) is Duncan’s necessary love interest. She lives next door to Trent’s house with her mother Betty (Allison Janney) and brother Peter (River Alexander). Susanna is really quite fed up with her mother and her mother’s friends like Kip (Rob Corddry) and Joan (Amanda Peet), who all act like juveniles, when she’s so much more mature than they are. Duncan’s summer journey has him working for Owen at the Water Wizz Water Park, developing a friendship with Susanna and slowly coming out of his shell from a hunched-over, timid kid to a guy who interacts with others and doesn’t let bullies walk all over him. This film has you rooting for Duncan every step of the way and celebrating his achievements no matter how small. 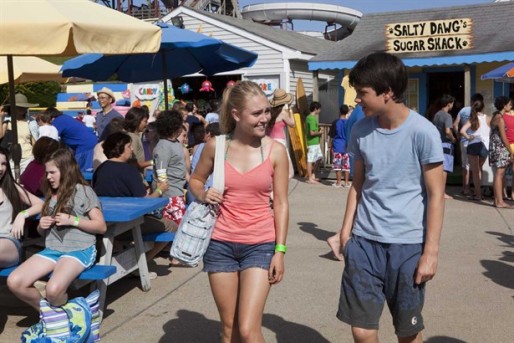 The cast is noticeably good from the top on down. For a movie so full of heart and emotion, the acting is key. It’s all anchored by James in this standout role. You can feel the nervousness, angst and embarrassment in every scene to the point where you want to shake him, hug him or help him — perhaps all three. This is Rockwell’s best performance since Moon. He plays this mentor role so well and manages to combine a bit of snark with Owen’s lessons. When Owen lies about his duties to water park manager and girlfriend Caitlin (Maya Rudolph), he tells Duncan, “That’s the one you wait for, my man.” Carell usually plays the lovable types, so it was different to hate his character here; Carell pulls it off nicely. Collette doesn’t have a lot to do here as Pam other than mother Duncan and baby Trent, so Janney tends to overtake any scene she’s in as the excessively perky and ready-to-party Betty. Robb has grown up on camera much like Dakota and Elle Fanning, so it’s a little strange to see her as a young lady and love interest here so soon. Faxon and Rash surprised me with their roles as water park employees — no mere cameos as most directors do. Roddy (Faxon) tells people when it’s safe to go down the water slide and ogles young ladies in bikinis who are waiting. The quirky, nerdy, bespectacled Lewis (Rash — also of TV’s Community) threatens to leave the park every summer, and he never quits despite the going away party he receives in this movie.

Some coming-of-age films overdo their depiction of lessons learned and try to be too hip or quirky or something other than honest. When they instead come from the heart and show realistic, flawed characters, you can’t help but connect to them and the movie. Recently, The Perks of Being a Wallflower tackled similar subjects and gave me goose bumps. The only thing that Faxon and Rash truly got wrong was their implication that Duncan could put his initials on a Pac-Man machine when he got a high score; Pac-Man and similar arcade games of its generation only display a numerical high score with no initials or identification. This score lasted until the machine was turned off or lost power. That’s just nit-picking. I loved this movie, and I can’t wait to see what Faxon and Nash have planned next.