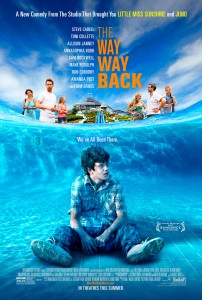 A struggling 14 year-old finds solace and support at a local water park in the coming-of-age film The Way, Way Back.

In the 1979 film Meatballs, Bill Murray‘s character (a camp counselor) says to a new arrival, “You must be the short depressed kid we ordered.” That film was another coming-of-age story involving another disconnected young teen trying to get by. He could have said the same about the lead character in this film, Duncan (Liam James).

Duncan and his mother (Toni Collette) head off with her detestable boyfriend (Steve Carell) to spend the summer at his vacation house. For Duncan, it’s a hopeless mess until he meets an eccentric water park manager (Sam Rockwell) who takes him under his wing.

James plays the perpetually dour Duncan perfectly throughout. We cringe at his every setback and burst out with support at every triumph. Along the way, we get a film filled with hilarious one-liners that nicely offset the tension of the deeper dramatic moments. There’s even a solid soundtrack to help set the right tone.

I mentioned Meatballs earlier because this film reminded me of it time and again on many levels. Few remember it even though it was Murray’s first starring role — for good reason. The jokes were great. The angst was palpable, but you never could escape the cheesy, paper-thin nature of the total package. It’s like having an original Rembrandt paired with a kitschy vanity frame. 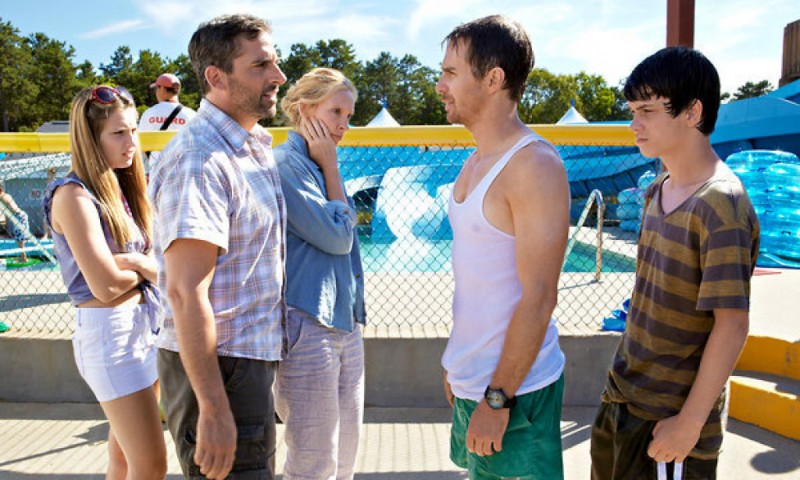 Aside from Duncan, every other character is one-dimensional or entirely enigmatic. Trent, the boyfriend, is always 100% reliably a jerk. We can’t even begin to fathom what Pam (Collette) sees in him. That’s in part because we know nothing about Pam, either. The same goes for Trent’s friends and neighbor played by Amanda Peet, Rob Corddry and Allison Janney. Janney’s the only one that’s interesting in the least but only because hers is the only character with any hint of a personality. Trent has a teenage daughter that’s on the trip, too, but why she’s included is anyone’s guess. She might as well have just been replaced by a family cat.

The real standout of the film is Rockwell as the odd but sympathetic park manager who sees a kindred spirit in Duncan. The film benefits every time he’s on screen. Unfortunately, he’s surrounded by an eclectic group of equally underdeveloped characters. Chief among them is the awesome Maya Rudolph in a totally wasted performance.

The end result is an extremely uneven film that still manages to find its way and deliver a very funny, very touching story. I just wish the writers could have provided a better frame for this otherwise impressive artwork.