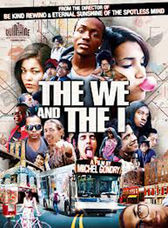 I sometimes feel helpless as a moviegoer when I watch a disaster unfold before me that I can do nothing about. I’m not talking about asteroids in a movie like Armageddon or Deep Impact. I’m referring to the slow descent of a filmmaker’s career as each successive movie is less creative and entertaining than the one before. In particular, the films of Michel Gondry have been going downhill for a long time. Can it be that the same person who made Eternal Sunshine of the Spotless Mind is also responsible for The We and the I? The credits tell me so, but I don’t believe it. Someone who was once so boundlessly creative as a filmmaker — those beach scenes in Eternal Sunshine of the Spotless Mind were filmed in a house that could break apart to fit the story — needs an intervention before he’s reduced to filming McDonald’s commercials.

French writer/director Gondry got his start in music videos for acts as diverse as Bjork and Massive Attack. He worked as cowriter/director on Eternal Sunshine of the Spotless Mind in 2004 before writer/director status on The Science of Sleep in 2006 and Be Kind Rewind in 2008. Gondry directed The Green Hornet in 2011, and this proved to be the low point of his career. I had some hope for his work when he directed an episode of Jimmy Kimmel Live! as a guest director in 2011 that was only surpassed in coolness and creativity by the episode directed by Quentin Tarantino in 2004. Gondry has an interesting approach to composing shots and telling a story, but it seems that a little more of the magic is lost with every film. The We and the I has just a bit of Gondry’s magic and instead feels like it could have been directed by anyone handed the script that’s largely improvised.

There’s a bit of back story to the making of The We and the I. As I read elsewhere, Gondry spent about two years with the Bronx high schoolers who also act as versions of themselves to prepare for this film. Gondry conducted workshops and met with these students at community arts center The Point. The result is this film. It takes place largely on a city bus on the last day of school as a group of mostly black and Hispanic kids plan for their summers and interact as only kids who have known each for a long time tend to do. I had high hopes for a few minutes because the movie begins with a toy bus rolling along city streets to the strains of Young MC’s “Bust a Move.” That’s a pure Gondry director’s touch, but aside from close-ups of phone screens for played videos or text messages and some brief painting-like re-creations of events or fantasy sequences, there’s not much else there. This is one very long bus ride with kids who are mostly bratty and annoying. Gondry does manage to identify the parts of the film creatively. “Part One: The Bullies” appears on a cigarette pack run over by the bus. “Part Two: The Chaos” is in a neon sign in a store window. “Part Three: The I” is on a billboard.

As a former school bus rider, I know that a lot of “acting out” happens on buses with a large number of kids that have no supervision. That doesn’t mean that I want to watch a film about this experience any more than I want to be on the bus. The bus driver (Mia Lobo) hardly bothers to keep these kids in line. When traffic backs up, she lets a few of them off the bus to get pizza as long as they bring her a slice. You never really understand the dynamics of a group of kids and their relationships unless you spend some time with them. We’re thrown right onto the bus as viewers with no knowledge of these kids from the classroom or at home, so it’s hard to know who’s cool, who’s a jerk and who’s the hero or heroine. Instead, there is a bunch of bullies who make fun of everyone else and pull pranks on one another. These bullies made me immediately hate them, too, because they are especially rude to the people on the bus who are not students, including one guy with a weird lip problem whom they ridicule. One bully smashes another student’s guitar, too.

Over the course of the bus ride, students leave every few minutes at different stops, and those who are left receive more focus. Ultimately, on-again, off-again couple Michael (Michael Brodie) and Teresa (Teresa Lynn) are the last students on the bus. Had they been established as the main characters earlier in the film, it might have been more enjoyable to follow their path through all of the nonsense during the bus ride. Instead, some students who seem like major personalities leave the bus early in the movie and others stay around too long. Teresa shows up in a blonde wig that is the subject of many jokes and ends up on many other heads as well. There are students of all types — gay, quiet, creative, musical, short, big and smart — so the cast represents a wide cross-section of school stereotypes and personas. If the story only spent a short time on the bus and perhaps the rest at a school dance, field trip, party or any other number of events, it could have been more enjoyable and expository. As it stands, it’s boring and uninvolving other than making you feel like a babysitter.

The We and the I is a grand experiment that crashed. It’s a road trip without any milestones or character development and a character piece with people that you mostly dislike. If anything positive comes out of it, maybe some of these punks will see themselves in a new light on screen and change their actions. By the way, the title refers to how Michael, Teresa and really any of the students are coming to terms with their relationships as well as being themselves. Maybe Gondry will come out of this slump and return with an amazing movie. I’m the eternal optimist, so I’ll give Gondry another shot as long as he doesn’t make a movie confined to a bookmobile.