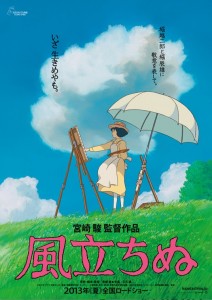 A young, talented engineer dreams of the perfect airplane at the dawn of aviation in The Wind Rises.

Famed Japanese director Hayao Miyazaki knows how to stir the imagination with lavishly creative animated films like his most famous examples — Spirited Away and Ponyo. However, this film is a bit different in that it’ôs a tribute to an actual historical figure — Jirô Horikoshi. Horikoshi was a brilliant aeronautics engineer who went on to design several Japanese military aircraft, including the famed Mitsubishi Zero.

The film introduces us to a Horikoshi as a young boy who dreams incessantly about the mechanics of flight. His visions abound with all manner of fantastical contraptions reimagined from English publications he could not yet read. The dreams also star his personal hero, Italian aircraft manufacturer Gianni Caproni, always impeccably dressed and ready with words of encouragement for young Jirô.

The story is both about his professional endeavors and his love for a young, perpetually ill girl, Nahoko Satomi, who captivated all of his non-flying thoughts. 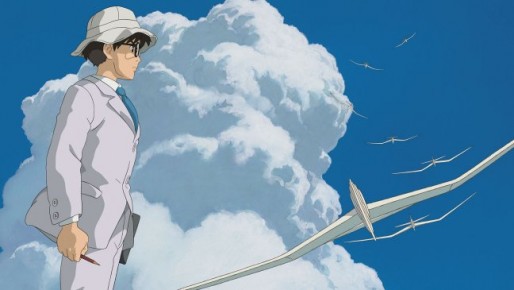 Like Miyazaki’s other films, this one boasts a beautiful bouquet of colors and depth that jump off the screen. The look shifts dramatically between four main styles. There are the colder, sharper tones of his professional life; the, bright, whimsical tints of his dreams; and the deeper, softer hues reserved for his time with Nahoko. Every landscape gets yet another treatment that involves rich impressionist strokes as if an oil painting suddenly leapt to life. The latter style produces, without question, the film’s most impressive visuals.

His choice of Horikoshi as a subject is both challenging and fraught with timing issues, especially for English viewers. Japan, over the last several years, has attempted to do its own reimagining of its place in history, especially where its actions in World War II are concerned. It’s clear from the film that Miyazaki has a profound love for his native country — why shouldn’t he? — but the way he glosses over the politics is just not palatable for much of the rest of the world. Here we have a country and man that designed the most singularly identifiable aircraft of the entire war and the primary aircraft used on the attack at Pearl Harbor. All of that is brushed aside with a hint that Jirô had no choice in the matter. He was just doing a job that he loved and had no real concern for how his beloved designs were ultimately used. English viewers will find no solace in such a suggestion. It’s impossible to believe that anyone so attached to his designs would have such a distant attitude toward their ultimate use. Added to the contradiction is the way Miyazaki glowingly presents Germany’s influence on Jirô and the rest of Japan. Whatever crack might have been left open before is slammed firmly shut with this sympathetic portrayal of Germany.

The love story is the most interesting and most beautiful aspect of the film, but it’s undeveloped and, it turns out, entirely fictionalized.

Even if we set aside the political challenges, we’re left with a main story that’s just not very captivating. The romance sprinkles in some exquisite imagery, but it’s just not profound enough to make up the difference. While the wind may rise, the story itself evaporates like the morning fog on a warm summer day.