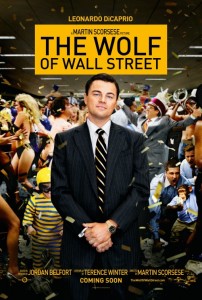 A highly motivated stockbroker rises from neophyte to Nero in The Wolf of Wall Street.

With all the more recent news about Wall Street excess, it’s sometimes easy to forget the myriad of scandals that came before. In the ’80s and ’90s, we had crooks like Michael Milken, Ivan Boesky and, of course, the folks at Enron. From that primordial pool of pilferage, Jordan Belfort (Leonardo DiCaprio) — an aggressive, starry-eyed stockbroker — went on to found the brokerage firm of Stratton Oakmont. He lead the company in defrauding countless investors out of hundreds of millions of dollars before it all came crashing down around him in 1998. His life of unbridled extravagance and wanton disregard for others is the topic of director Martin Scorsese‘s latest film.

Based on Belfort’s own books, his story seems the type that could only be created by Hollywood, yet the vast majority of what the film puts forth all seems to have happened. Belfort yearns for a better life and chooses Wall Street as his vehicle. The melding is like two aligned magnets snapping instantly and resoundingly into place. He takes his cues from the top producers he meets in the early days and quickly falls under their captivating spell — a spell that includes a veritable apothecary of pharmaceuticals and a moral-ectomy as its chief components. Before long, Belfort is living a lavish life beyond mere mortal comprehension, all on the backs of everyday people looking to make a small windfall from their meager savings. To Belfort, they’re all just sheep ripe for the sheering. 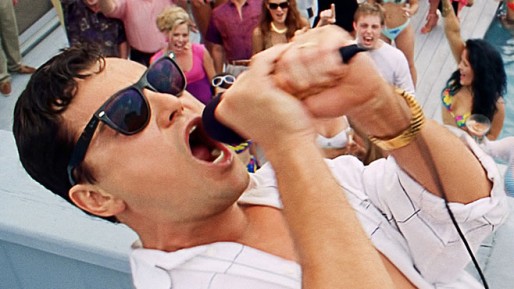 This story has already been the inspiration for another fairly well-regarded Hollywood film, 2000’s Boiler Room. Instead, Scorsese borrows heavily from his Goodfellas playbook and tweaks it to provide a more personalized examination of the events. He once again hands the reigns to DiCaprio — their four other collaborations have grossed over a billion dollars combined — who handles the role with a hint of unnerving ease. Equally impressive are Jonah Hill as Belfort’s main partner, the somewhat off-center Donnie Azoff, and Margot Robbie as Belfort’s stunning trophy wife Naomi.

Through it all, we have a story that’s fairly interesting with curious characters, but that just can’t seem to find the right touch. It just doesn’t have any magic. There’s very little in it that feels fresh. That’s a pretty large anchor to bear for a three-hour affair. I also have to question Scorsese’s choice of DiCaprio for the lead. Unfortunately, there are just too many distracting similarities between his own life and that of Belfort’s. Even worse, it recalls DiCaprio’s last role in the heavily criticized film The Great Gatsby. That film drew much ire for its outlandishly decadent party scenes, although I enjoyed it. We get much of the same feel here, but it’s spread out over most of the movie’s length.

Watching the film, you cannot escape the sense that you’re witnessing less a cautionary tale than a confused glorification of unchecked abandon, drug use and outright debauchery. This is one wolf that would have fared better had we not gotten the feeling that we’re the sheep it had in its sights.