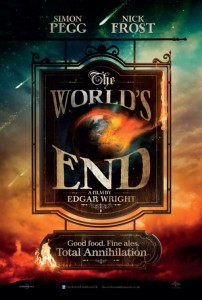 A group of childhood friends reunites to complete an unfinished epic bar crawl from their youths only to find their path blocked by alien robots in The World’s End.

Gary King (Simon Pegg) hasn’t ever been able to come to grips with getting older. Once the charismatic leader of his group of friends, it’s now decades later and he’s still wearing the same clothes, driving the same car and still going nowhere. The rest of the group has, of course, moved on to bigger and better things — getting married, starting businesses, raising families and generally doing what you do. One day, Gary finds himself at a crossroads and decides there’s only one way to set things right. He has to round up the old gang and finish The Golden Mile, a once revered local bar crawl that they failed to finish all those years ago. After some dubious complications, the five friends — Gary, Peter (Eddie Marsan), Oliver (Martin Freeman), Steve (Paddy Considine) and Andy (Nick Frost) — set off to enjoy some of the old magic.

Of course, it’s been 25 years, and things have changed in Newton Haven, the town they all grew up in but have since left. The bars are still there, but now they’re mainly parts of cookie-cutter chains. The people don’t recognize them. The entire town is dull, and the people are oddly lifeless. This isn’t going to be as much fun as any of them thought. However, not long into their quest, the group runs into an unexpected roadblock. It seems that the town has been taken over by an alien race that  supplant our bodies with mannequin-like robots. The friends realize they’re in imminent danger of being taken over and decide that the best plan of action is to just continue on finishing their crawl in order to avoid suspicion. 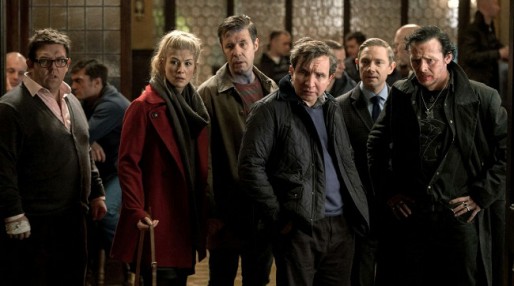 This is the final entry in a trilogy of films — at least that’s the story they’re sticking to for now — from writer/director Edgar Wright that each star Pegg and Frost as buddies. The first was Shaun of the Dead, which debuted in 2004. Then came Hot Fuzz in 2007. I loved Shaun of the Dead. It was novel, intelligent and absolutely hilarious throughout. Hot Fuzz was a different animal entirely. I found it dull, overly silly and not all that funny.

This film, unfortunately, is no better than the last. I found it extremely uneven with a tiresomely long first act. Gary is too annoying and too unbelievable a character to connect with. The look of the film is drab. The other characters don’t have any chemistry and look out of place together. Worst of all is the dialogue. It’s as if the writers culled together a pile of punch lines and then, almost randomly, sprinkled them through the script at the end of entirely meaningless chatter. There’s even one joke where Gary doesn’t realize Oliver is talking into his ever-present headset. Really?

Don’t get me wrong; the film has its moments. Some of the jokes are classics — like a scene near the end voiced by Bill Nighy as the alien leader — but the setup just isn’t worth the payoff. I remember looking over and seeing one girl sound asleep next to her boyfriend and thinking that she’s having a better time.

The entire film feels like a low-budget version of the much better Seth Rogen film This Is the End. Think about it. You find out your childhood town is taken over by aliens and that your life is in danger, and your plan to survive is to continue on with a bar crawl? Yep, it’s that ridiculous.