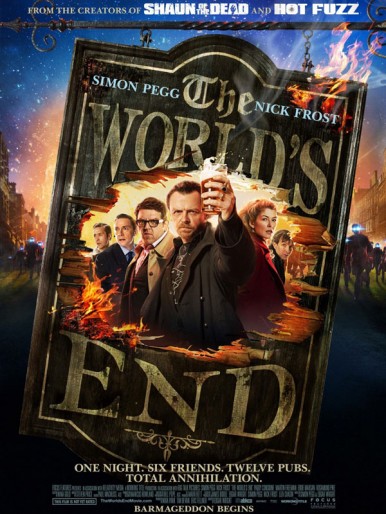 Pub crawls are a rite of passage for many young adults as they turn the legal drinking age or otherwise want to mark a special occasion. I went on two such crawls in my senior year of college at Villanova University right before graduation. We did an impromptu private crawl in which there were no crowds, and we joined the larger class crawl that was out of control. In both cases, we took turns carrying Earl The Dead Cat — a stuffed toy — and had at least one drink at each of around 15 bars. I probably wouldn’t make it halfway today. The latest comedy from the filmmakers behind Shaun of the Dead and Hot Fuzz has as its basic plot the reunion of old friends to finish a pub crawl in their English hometown. It turns into so much more as relationships are tested, new ones are formed and robot substitutes for the townspeople attack the drinking team. Yeah, The World’s End is that kind of movie.

I was fortunate enough to see The World’s End as part of a special event billed as Edgar Wright’s The Cornetto Trilogy aka The Blood and Ice Cream Trilogy, which includes Shaun of the Dead and Hot Fuzz before it culminates with The World’s End. Cornetto is an English brand of ice cream with a design that looks a lot like the Nestlé Drumstick flat-top shape. The connection to the movies is that a flavor of Cornetto appears briefly in each film. I would have never noticed these ice cream “cameos,” and to drive home the point, the flavor in The World’s End is the punch line to a joke. The red Cornetto Strawberry shows up in Shaun of the Dead, Hot Fuzz features the blue Cornetto Classico and The World’s End displays the green Cornetto Mint. When you watch these three movies as a trilogy, it’s obvious to see the progression of skill of the filmmakers. They’re all directed by Edgar Wright, and Wright shares the writing duties with star Simon Pegg. They all have the same gag with a fence, too. Shaun of the Dead earned cult status as a popular twist on the zombie genre, Hot Fuzz pokes fun at buddy cop movies and The World’s End blows both films away as that perfect blend of comedy, one-liners, the bonds of friendship and outrageous scenarios.

The World’s End begins with Gary King (Pegg) visiting his four friends to convince them to return to Newton Haven to complete The Golden Mile, a drinking journey through the town’s 12 pubs. Andy Knightley (Nick Frost, Pegg’s costar in the trilogy), Oliver Chamberlain (Martin Freeman), Steven Prince (Paddy Considine) and Peter Page (Eddie Marsan) all lead successful lives, but Gary is just so outgoing and pushy that he is able to appeal to their buried reckless nature. Ultimately, this journey is more about Gary than the others. They head back to town, and Oliver’s hot sister Sam (Rosamund Pike) joins them along the way. At first, the pub visits are normal. The titular bar is the final stop on The Golden Mile. Can they make it? The comedy is constant, especially with Gary in the lead, so when the group discovers that the town’s citizens are now robots with detachable limbs and blue ink-like blood, the guys have to band together to take on the robots a la the defense against the zombies in Shaun of the Dead. 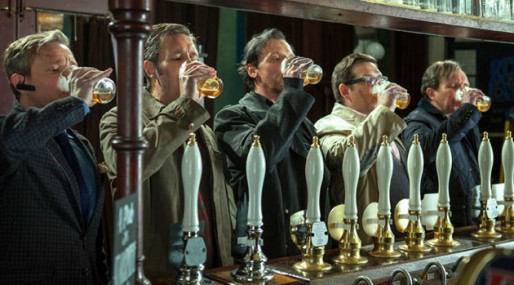 I was quite impressed with the cast. Pegg is not the geeky guy you’ve seen before. Gary has black hair and a grating type-A personality; Pegg plays this to the hilt. It’s no wonder that Gary’s friends hadn’t looked him up over the years. Frost starts off quiet and builds higher over the movie to a point where he’s even louder and crazier than Pegg. Wright couldn’t have picked a better trio to support Pegg and Frost than Freeman, Considine and Marsan. They establish fully formed personalities from the beginning, and their rapport leads to many naturally funny moments. There’s some drama between Gary and each of his friends. These tensions lead to a few nice moments, but these are just times to take a breath between laughs. Look for familiar English character actor David Bradley — Argus Filch in the Harry Potter movies — as a mysterious old coot who pops up during the night. There are two wonderful, uncredited cameos — one just a voice that’s heard — in The World’s End that show how much pull Wright and Pegg have after their first two efforts.

The special effects are silly but appropriate. Most of the work involves broken robot heads and limbs ripped off torsos. Expect to see a lot of blue blood. It’s neat to see the progression of the robots over the course of the film, and their actions are tied to the names of the pubs in The Golden Mile. The Cross Hands features an unusual battle with a robot, and The Mermaid has seductive robots. Just make a point of paying attention to the pub names, and you’ll enjoy the clever connections. The characters are quite resourceful, so the action scenes have a level of camp as well as gore and quick moves.

As much as I would love to see another movie akin to the ones in the trilogy, I hope that Wright and Pegg quit while they’re (far) ahead. The World’s End finishes the trilogy on a high note, so it would be quite a gamble to try just one more. Pegg and Frost make a wonderful pair, so I do hope that they share a comedy of some sort in the future. Until then, we’ll always have The Cornetto Trilogy.