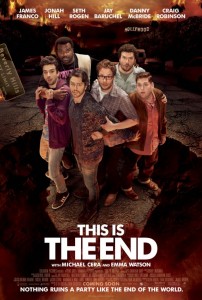 Seth Rogen and Jay Baruchel head to a party at James Franco‘s new house and and up smack in the middle of Armageddon in the irreverent comedy This Is The End.

Seth Rogen and friends have a long history of over-the-top films that revel in the most base levels of juvenile male humor. This Is The End is their crowning achievement.

In the film, Seth and a myriad of other actors portray caricature-like parodies of themselves playing up the general perception that actors are totally disconnected from the real world and instead dulled by endless celebrity entitlements.

The story starts with Seth picking up Jay who’s come to Los Angeles to spend time together as the two are old friends. Seth wants Jay to connect with his new Hollywood friends and takes him to a party at James Franco’s new house. There they run into a smorgasbord of Hollywood celebs including Jonah Hill, Craig Robinson, Emma Watson, Jason Segel, Michael Cera and many more.

The first roughly 20 minutes of the film is all just preparation. This segment feels very much like an extension of Pineapple Express with lots of pot humor and little else. I was just growing bored with it when the real story took over. Out of nowhere, an earthquake opens up a huge sinkhole in front of Franco’s house, devouring no small segment of the cast. Before too long, everyone figures out that this is not just a typical disaster but actually the biblical final Armageddon.  Rogen, Baruchel, Franco, Hill and Robinson all decide to hole up in Franco’s compound in an effort to ride it out while mystified at why they haven’t been beamed up to heaven. Soon after, Danny McBride shows up unexpectedly to fill out the main cast.

What follows is an endless array of surreal scenes that literally leave you speechless. Everything is so beyond the norm — even for these slapstick vets — that you can’t do anything other than just go with it. Just as you get over the audaciousness of one scene, another one immediately trumps it.

What’s really surprising is how, piecemeal, the jokes aren’t all that funny but, taken as a whole, the overall experience is absolutely hilarious. This is definitely not a film for everyone. The bathroom humor is on a scale that will turn off a wide swath of potential viewers. There’s no shortage of gratuitous imagery, including quite a few large penises that seem injected (in one case literally) just for pure shock value.

This feels like a project only a very specific few people in Hollywood could pull off. It’s so outrageous that most studios likely wouldn’t even consider making it if not for the names behind it. I suspect that this is a project that Rogen and cowriter/codirector Evan Goldberg have had in their minds for a while just waiting for the right time to go for it. This is that time. It’s not a perfect comedy as it’s a bit uneven and even a bit long. Overall, it’s a romp to the pearly gates that will transport fans to comedic nirvana.