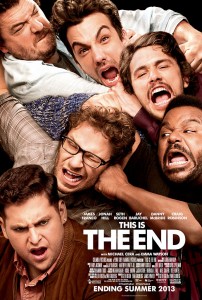 When the Apocalypse comes, I want to stay as far away as possible from the Hollywood mansion of James Franco. It’s one thing to watch it up on the silver screen, but it’s another thing entirely to live it. Fortunately, I had the luxury of sitting in a movie theater in which the worst thing outside was some heavy rain from the tail end of a hurricane. The best comedies are the ones that make you laugh so hard that you cry, snort or lose control of any other number of bodily functions. Another sign of a great comedy is that you’re laughing so loud that you miss other funny bits. Yes, This Is The End is that good. I really didn’t expect it to be much more than a self-deprecating romp. Boy, was I wrong. The power of writers/directors Seth Rogen and Evan Goldberg compels you to go see this film, and I bet you a Milky Way bar that you’ll like it.

You might have seen one trailer for this movie. Do your best to avoid any others because they probably ruin at least one surprise transition in the movie. However, even with knowing what was going to happen, it didn’t reduce my convulsive laughter unlike all of those Scary Movie flicks that throw all of the good stuff in the trailers. The premise is simple, but the filmmakers run with the idea and take it to places that I could have never imagined. Growing from a short film that is really just a trailer, This Is The End is an expansion of Jay and Seth versus the Apocalypse. The short/trailer gives you a taste of what could happen if Rogen and Jay Baruchel were stuck inside an apartment with each other during the end of the world. Rogen and Goldberg were responsible for writing Superbad, Pineapple Express and The Watch, so you know you’re in for a treat. They also wrote The Green Hornet, which thankfully takes some jabs here.

Part parody of end-of-the-world movies and part satire of Hollywood life and celebrities/actors, the film is full of surprises because you don’t know what the “characters” will be like. All of the actors portray versions of themselves, sometimes very warped and other times close to reality — at least the reality those of us who don’t know them personally might expect. Baruchel arrives in Los Angeles to visit Rogen and hang out at his house for a few days. Rogen suggests that they go to a big party at Franco’s house. Baruchel doesn’t want to go because he doesn’t know that crowd, but Rogen insists anyway. It starts out as a packed, wild party with Michael Cera doing things you might want to forget. Cera has one of the best parts early in the movie. Other party guests include Rihanna, Paul Rudd, Mindy Kaling, Christopher Mintz-Plasse, David Krumholtz and Emma Watson. (Later, someone memorably utters, “Hermione just stole all of our shit.”) When Rogen and Baruchel leave to buy some smokes, all hell literally breaks loose as the ground opens up, people panic and the friends rush back to Franco’s pad just in time to see a giant sinkhole to hell open up in the front yard.

The film shifts into a different mode in the middle with Baruchel, Rogen, Franco, Jonah Hill, Craig Robinson and Danny McBride figuring out how to survive what’s going on outside. Smoke and flames are all that they can see, so they scavenge for supplies and riff on all kinds of topics. I don’t know how much of the dialogue was improvised and how much was scripted. Either way, it’s hilarious from start to finish with only a minute or two that gets calm before the last third of the film. The six main members of the cast play versions of themselves with various degrees of vanity. Franco is perhaps the biggest diva, Baruchel is afraid of everything, Rogen is the most level-headed, Hill takes the calm route for a while and Robinson and McBride are just out of control. The comedy is fully of the R-rated variety, and I can’t really discuss much of it. Imagine you and some of your best friends making fun of each other with no filter and fighting over rations, and you get some idea of what the movie is like. Of course, there’s that whole Apocalypse thing going on, and there are all kinds of dangers outside the door. I was completely impressed that these actors poke fun at themselves throughout the film. Franco has souvenirs of his films in the basement, and to get in “character,” he even painted the art on the walls owned by his movie self.

To go any further would spoil some of the surprises, and I’m sure that some reviewers will do this by accident given the events of the last third of the film. Don’t even look at a cast list because there’s at least one cameo from a very good sport that will make your jaw drop. Although it really doesn’t make sense for a sequel to this comedy, I hope that it inspires other filmmakers to do something similar. To push the idea further, I would love for Rogen and Goldberg to revisit this format or reassemble the cast much like Christopher Guest does with his improvised comedies that feature mostly the same actors. If the end of the world is nigh, it would be a treat to go out laughing at this bunch of knuckleheads. Outrageous R-rated films are an acquired taste; if you like that blend, This Is The End should be your theater destination. It’s got an uphill climb against Man of Steel, so it really deserves its own weekend at the number one spot. This Wednesday release is the only alone time this film will get before Superman blows these pals away at the box office. Something tells me that Franco and crew would find a way to get around Superman and his powers, but for now, the only super powers you’ll see here are McBride’s ways to offend.