The other film of the week is Woody Allen‘s latest endeavor—To Rome with Love. Here we get a tale that involves us in the story lines of several groups of people all centered around Rome. 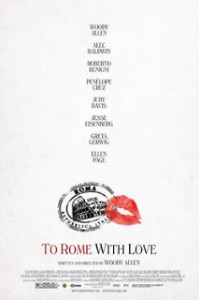 First there’s Hayley and her new Italian boyfriend Michelangelo (Alison Pill and Flavio Parenti) and her parents, Jerry and Phyllis (Woody Allen and Judy Davis) who’ve come to Rome for a break and to check in on their daughter. Along the way they meet the boyfriend’s parents including his father who has an amazing singing voice but, apparently, only in the shower.

There’s also a young couple, Antonio and Milly, who are about to meet his parents when Milly gets lost in the city. Both then end up having their own dalliances. Antonio is mistakenly approached by high-end hooker Anna (played wonderfully by Penelope Cruz) while Milly wanders onto a movie set and meets a middle-aged sex symbol (that no one else would define as one) that, of course, takes advantage of her naivete.

There’s also Jack (Jesse Eisenberg) and Sally (Greta Gerwig) whose story seems perhaps to be nothing more than a nostalgic memory of simpler times coming from the older John (Alec Baldwin) who interacts with Jack in a dream-like fashion. Their story involves the endless battle between heart and mind when chemistry gets involved. This “science” comes into play when into their lives comes Sally’s friend, Monica (Ellen Page).

Finally—more or less—there’s plain old Leopoldo (Roberto Benigni) who inexplicably finds himself transformed from obscurity to instant stardom for no apparent reason. Phew.

In total we end up following along roughly eight different story lines that are all fairly unique in their approach. The problem is not just in the breadth of stories but that none of them feel connected and they just didn’t fit together properly for me. Much of it was strange and felt very forced. It’s as if Allen conceived of each story as its own skit and then, short of time, stuffed each individual idea together into one vehicle.

Woody Allen’s movies have always been different and can be quite hit-and-miss. I saw this with a group of women and they all seemed to love it. I found it entirely lacking, uninteresting and downright confusing. Is John simply remembering Jack and his story (Jack has been a nickname for John)? If so, why not just say so? Why the ambiguity? Then there’s the ludicrous moments like Michelangelo’s father who’s afraid to sing in front of an audience but agrees to do so naked, in a shower, on stage. Come on.

What struck me the most was the number of people leaving the theater commenting that this is a better film than Midnight in Paris. There’s just no way. This film isn’t in the same league as that Allen effort and I stand by the lackluster reviews as evidence of my belief in this. Yeah, I know……