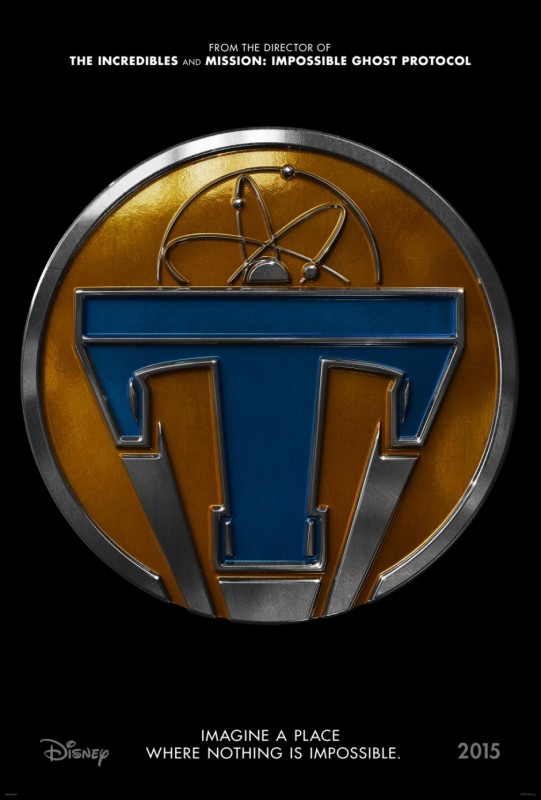 I’m happy to admit that I’m a big fan of Disney animated films and theme parks. That doesn’t mean that I inhale everything Disney without restraint. I have my limits. There was a dull time when Disney churned out such dreck as Lady and the Tramp II: Scamp’s Adventure and Cinderella III: A Twist in Time. When I went to EPCOT for the first time, I didn’t care much for learning about energy; I just wanted to see the audio-animatronic dinosaurs. Also, I much prefer the holiday version of It’s a Small World to the original, and it all has to do with that song. Tomorrowland falls firmly into the category of Disney properties that I can’t support. I guess Disney figured that they could experiment a little after the huge success of the Marvel movies and the upcoming Star Wars blockbuster. With little of the creativity connected to the iconic theme park land and a whole lot of confusion, this live-action adaptation with a theme park connection joins the junk pile with The Haunted Mansion and The Country Bears. Tomorrowland is an ambitious movie that should have never been made.

I cringed when I first heard about Tomorrowland because I couldn’t see a way for anyone to turn a land into a movie. Cowriter/director Brad Bird had success with The Iron Giant, The Incredibles (one of my favorite Pixar offerings) and Mission: Impossible – Ghost Protocol, while cowriter Damon Lindelof is best known for his association with Lost. Casey Newton (Britt Robertson of Under the Dome) is a rebellious teen with a NASA engineer (Tim McGraw) for a father. After an arrest for one of her stunts, Casey finds a magical pin with a giant “T” on it that somehow transports her to another place when she touches it. Investigation of this pin leads her to find strange young girl Athena (Raffey Cassidy) and a grouchy, disillusioned inventor named Frank Walker (George Clooney), who has been hiding out in rural New York. The three investigate the connection between our world and the titular world reached with that special pin, and things get a little dark and dystopian for what appears to be a bubbly, futuristic film.

The biggest problem that affects this big-budget, overly-long mess is that none of it makes sense if you really think about it. Let’s start with the pin. When Casey touches it, she’s suddenly in another plane of existence, but if she walks too far over there, the equivalent steps in our world might take her into a wall. At some point, the filmmakers must have realized that this concept just doesn’t hold water, so it’s dealt with inconsistently and only to suit some sort of requirement that you can’t get too comfortable with the story before the writers jolt you again. The base story is just ridiculous. This other place is meant to be a haven for dreamers who aren’t appreciated in our world, but wouldn’t their talents be better served here somehow? I would expect that the people in Tomorrowland who seem to have such a bright future would want to foster creativity in our world as well as theirs so that both places thrive. Tomorrowland is a film in search of a plot, and tacking on pieces of one just doesn’t work. Whoever approved this concept beyond a creative meeting about new properties should be fired. Bird turned down the next Star Wars film for this one, and maybe that’s a good thing. We might have ended up with another Jar Jar Binks if he had gone in that direction.

The trailer and billing lead you to think that Robertson and Clooney are the stars. Although they are the central characters, Cassidy is a fresh face and acting dynamo with a great big beautiful tomorrow in her future. Her work gives the film its pulse and keeps it from flatlining completely. Hugh Laurie has a small part as David Nix, the leader of Tomorrowland, and he takes on the role of antagonist and preacher in the second half. There’s a nice sequence in a Texas memorabilia store called Blast from the Past that involves Keegan-Michael Key and an unrecognizable Kathryn Hahn. Both actors exhibit more life and oomph in five minutes than Robertson and Clooney do in the entire movie.

Most of the money in the budget must have gone toward the extensive special effects. Every glimpse of Tomorrowland involves flying vehicles and expansive landscapes of metallic towers. There are plenty of explosions, ray guns and robots, too, to make you think that the filmmakers maybe thought that they could misdirect moviegoers with all of the bells and whistles from thinking about the silly story. My point of detachment came when Casey and Frank jump into a bathtub to escape crazed agents bent on capturing them. It’s clear that they spared no expense in the lavish digital creations. All of the gorgeous scenery in the world can’t mask the true image beneath the surface. An adage about lipstick and a pig comes to mind.

There are certainly plenty of Disney references to catch if that’s your thing. Scenes from the 1964 World’s Fair introduce It’s a Small World and other Disney characters briefly. There are plenty of glimpses of other Disney properties in Blast from the Past, including a lot of Star Wars merchandise. The jet packs used in the film remind me of The Rocketeer. I didn’t spot any Hidden Mickeys, but I’m sure that there must be some. The iconic Space Mountain appears in some distant shots of Tomorrowland, and its presence reflects the problem with the movie. There are times when I would consider it a disappointing trip to the park if I didn’t ride Space Mountain. Similarly, merely showing that instantly recognizable building doesn’t warrant its inclusion without experiencing what it and Tomorrowland are really all about.

Maybe Tomorrowland is a victim of the dreaded PG rating. With most studios aiming for PG-13 or R if they include more violence, sex or language, just about all PG-rated live-action films suffer the same fate. While shooting for that “family film” distinction, Tomorrowland may have just ended up somewhere in between accessible and juvenile. Most families would rather save their money for a day pass to one of the parks.

Other than Cassidy’s performance, there was one more bright spot in the film in the music by Michael Giacchino. The themes are ethereal and much better than this movie deserves. It’s not coincidental that Giacchino also wrote and conducted the music for Lost and Mission: Impossible – Ghost Protocol. Fans of the legendary Sherman Brothers will enjoy the inclusion of two of their memorable songs. Music and songs don’t save this Tomorrowland from its imminent collapse. I hope that Disney responds to the inevitable criticism of this effort to push the boundaries and think up something fresh and new in the true spirit of Tomorrowland as I know that they can. There are plenty of other offerings in the summer season. Even if there is no line at Space Mountain, you sometimes just want to enjoy another attraction.