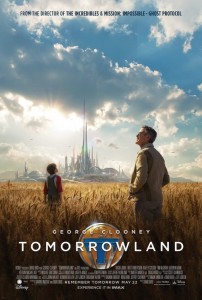 A rebellious science student joins forces with a reluctant inventor to decipher the mysteries of the futuristic Tomorrowland.

Somewhere in the fabric of space and time, there exists a fantastical place called Tomorrowland. It exists in a dimension unknown by nearly everyone on Earth except for the very few invited to visit. Recruiters from this strange, magical land have sent curious invitations — in the shape of a small coin — to Earth’s most creative inventors and dreamers. The idea is to give such people a platform to create, free from the distractions and restraints they would normally encounter in everyday life on Earth. At least that’s how it was supposed to work out. All is not as it seems.

The film’s opening sequence presents us with a fairly intriguing concept. Unfortunately, it’s a concept that never gets any backing from the script, the actors or the effects. Everything feels forced and contrived. The entire first half of the film comes off like a cheap commercial pimping Disney theme parks. The only thing missing is Mickey Mouse. 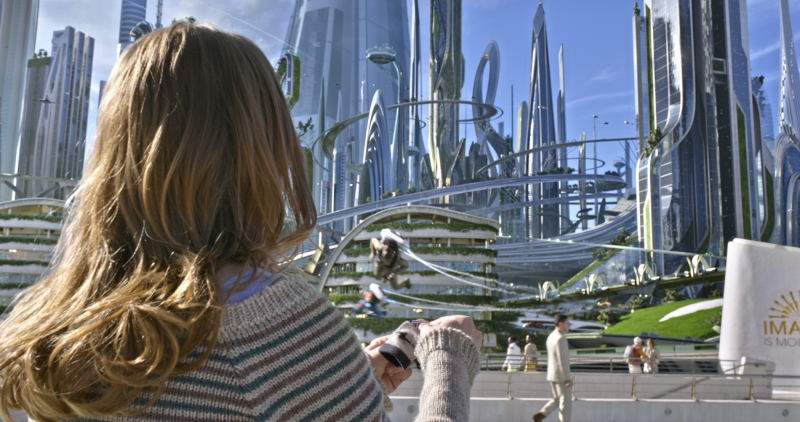 The plot is nearly impenetrable, especially for younger viewers. This shouldn’t come as a surprise because it was cowritten by Damon Lindelof. He is better known in some circles as the guy who ruined the once revered and then reviled TV series Lost. It doesn’t help that viewers are purposely kept in the dark about key plot elements until well into the second half of the film. Standing in for answers is a cryptic, highly unsatisfying narration from an early invitee named Frank Walker (George Clooney). He introduces us to the story along with a fellow compatriot kept annoyingly off screen for no apparent reason.

The first true hints of the deeper underlying story come as a harbinger of the film’s other annoying trait — a completely unhinged level of sermonizing that would embarrass the most ardent Greenpeace supporter. All of it is surrounded by muted, fuzzy, uninspiring visuals that would have better suited a venue called Yesterdayland. The high mark of the film belongs to the film’s youngest star, Raffey Cassidy, in the critical role of Athena. It’s a brilliant performance well beyond her years and her peers.

Once it was over, I couldn’t help but compare the experience to potpourri. It initially creates a nice enough aura, but upon closer inspection, you realize that it’s just a bunch of random unappealing chunks tossed haplessly into a bowl just above the toilet.