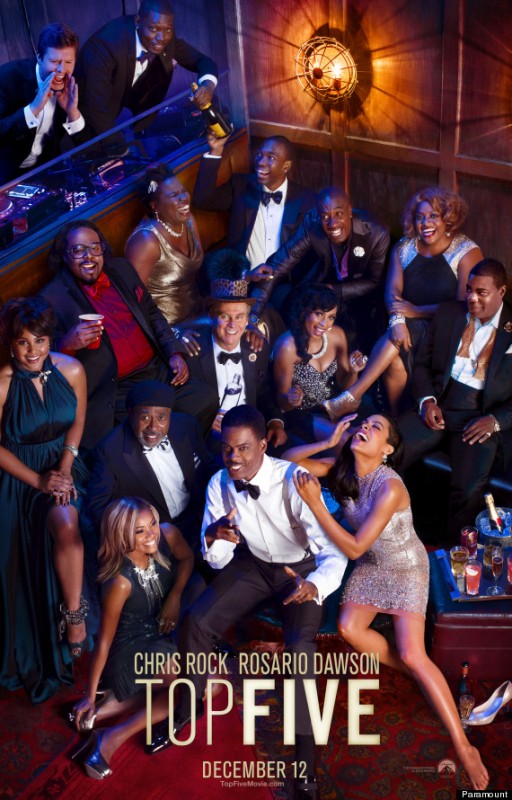 I like Chris Rock. I really do. His distinct voice, sarcastic wit, perfect delivery and in-your-face subject matter and truths combine to make him perfect for comedy. Saturday Night Live rocketed him to stardom as it has so many other comedians, and he developed a strong presence in the movies with successes like Lethal Weapon 4 and the Madagascar series. Rock produced, wrote and directed Top Five, and it includes all of the things that I cited about Rock, perhaps in different quantities over the course of the film. Unfortunately, Top Five has an identity crisis, much like its main character. Can I name my top five Chris Rock films? Sure, but Top Five wouldn’t be one of them.

Top Five takes place over the course of one very long, eventful day in New York City. Comedian Andre Allen (Rock) had a string of movie successes, notably as a costumed bear in the Hammy the Bear trilogy. Sick of being pigeonholed as Hammy, Andre tries to branch out with a serious role as the leader of a slave rebellion in the Haitian Revolution. He’s in the middle of promoting this drama and just days away from marrying a bitchy reality star named Erica Long (Gabrielle Union) when he’s approached by a reporter for The New York Times to do a profile piece. Chelsea Brown (Rosario Dawson) saw Andre years ago at a college performance and can’t contemplate why he’s not funny anymore. The conversation and interactions between Andre and Chelsea get heavier and more personal over the course of the day, and the film ebbs and flows as it fluctuates between truly funny scenes like a house party to more somber moments as Andre struggles with alcoholism and considers backing out on the wedding. The title comes from the house party scene, in which the characters argue about their five favorite rap artists. The rankings and lists go beyond this scene, so there’s an implication that this day may just be in Andre’s top five.

Despite my mixed feelings on the project, this may be one of Rock’s best performances. He’s believable and hilarious. Perhaps that’s because Andre is a doppelgänger for Rock himself with Marty the zebra in the Madagascar movies his biggest success and the real-life equivalent of Hammy. With Rock, if the content doesn’t get you laughing, the delivery will. This explains the numerous memorable small roles that Rock played over the years. Each of them has a scene-stealing aspect, and maybe that’s where he fares best if you consider his success on Saturday Night Live and its short sketches. I can’t think of a time when I didn’t love Dawson’s contribution to a movie, and Top Five is no exception. She absolutely shines here and nicely balances Rock’s manic energy and laughs with her emotional honesty and warmth. I don’t tire of watching her.

Most of the other actors are confined to smaller roles, including J.B. Smoove as Andre’s bodyguard and Romany Malco as Erica’s producer. There are plenty of cameos by fellow comedians, and those appearances bump up the energy for a few minutes. You can’t rely on those moments, so it’s not surprising that the pace drops off afterwards. It’s heartbreaking to see Tracy Morgan in one scene given the accident that nearly killed him since the filming. On the other hand, Leslie Jones absolutely kills it in one sequence and proves why her star is rising and she jumped to prominence on Saturday Night Live this season. She has the same kind of energy and exaggerated expressions as Rock, so their scenes together in Top Five are some of the best and funniest. 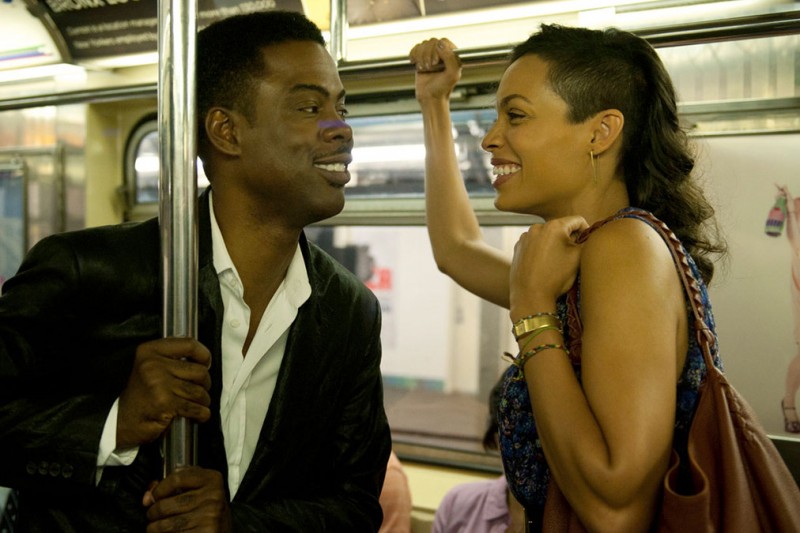 My main problem with Top Five is figuring out what it’s trying to be. Even if I don’t think about it and just go along for the ride, as I did while watching it, the laughs come in occasional bursts, and there are too many dead spots. Rock’s goal may have been to produce a dramedy, but that’s not what the trailer and ads present. I liken this kind of movie to Adam Sandler’s Punch-Drunk Love. It has moments of what you love about the lead actor in the middle of a different kind of movie. An outrageously funny, drug-fueled hotel party captures the excesses of fame, and the finale is fabulous at just the right time when you’re ready to throw in the towel. The middle parts are just rough and inconsistent for either a drama or a comedy.

I’ll gladly give Rock a shot if he produces another film. Honestly, Top Five is about what I expected. In a case of life imitating art, Rock has proudly been promoting the hell out of his baby much like Andre does for the Haitian film. Concert films have been overdone, so Rock should definitely pursue comedies and take some lessons from his contemporaries like Sandler who have already gone down this path. Top Five is perhaps a personal film for Rock, and instead, I really just want to laugh when I see him and let him work out his issues in some other way. He’s probably sick of hearing about this scene, but I would put the “Afro Circus” bit from Madagascar 3: Europe’s Most Wanted in my top five enjoyable Rock movie clips. It gets me laughing every single time, and isn’t that a comedian’s true legacy?