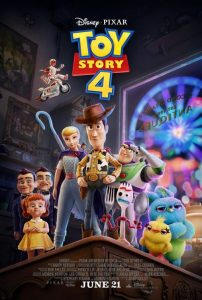 Woody comes to the rescue when his owner’s latest toy goes missing in Toy Story 4.

Toy cowboy Woody (Tom Hanks) worries that his current owner, Bonnie (Madeleine McGraw), will have trouble adapting to kindergarten. He’s determined to make the transition as painless as possible and surreptitiously hijacks a ride to school in her backpack. His worst fears are realized when Bonnie struggles to make new friends. In an effort to help, he covertly gathers up random creative items and slyly deposits them on her desk when she’s not looking. Bonnie fashions the hodgepodge items into a makeshift new toy that she calls Forky (Tony Hale). There’s just one problem. When Forky springs to life, it’s with a driving instinct to return to the trash where Woody procured the inanimate utensil that makes up the bulk of his being. Woody now feels compelled to take Forky under his wing and explain the joys of being a child’s treasured toy.

The fourth installment of this venerable franchise returns with a surprisingly touching tale. Sure, this is Pixar‘s most beloved cast of characters. Expecting fresh magic in a fourth chapter seemed a bridge too far, yet that’s exactly what the film delivers. This time around, the approach is a bit different. It’s much more a story about Woody’s coming of age. It’s also about a deeper understanding that, even though we might be comfortable in our current confines, there’s a bigger world just beyond the safety of our front door. Sometimes, you just need to take that first step into that vast unknown.

Pixar conveys these deeper concepts in true Pixar fashion. They construct a fictional sandbox, invite us into it and fill it with fascinating characters who craftily carry us through to the film’s underlying message. Our journey is made all the easier with another wonderful score from Pixar virtuoso Randy Newman. It’s a flawless melding of new and old.

I also have to tip my cap to the storytellers. When I first heard that they planned on using a spork as a primary character, I was understandably skeptical. I should have had more faith. Forky is the perfect conduit for this experience. He’s awkward, addled and always downright adorable. I want to go buy one for my desk. In fact, I’d like to adorn my desk with a whole family of them. Another curious choice is how dark the story is. Toy Story 3 was dark. By comparison, this is a blackout. It’s often categorically creepy. There’s an unmistakable The Twilight Zone vibe running through many of the visuals. It doesn’t hurt that a bulk of the action takes place in an old, dusty antique shop. I don’t think that the youngest viewers will be scared by it, but it is something to be aware of.

Speaking of the visuals, they’re also typical Pixar in that they’re absolutely top-notch. It’s the first time that I’ve felt the bar move on an animated film in a few years. Every detail is exceptional eye candy beyond what can be enjoyed in a single viewing.

If this is the end of the trail, it’s a fitting finale for Woody and the rest of the gang. The story leaves the door open just enough to let us dream of another adventure, but it’s one that we don’t have to have to feel the overwhelming warmth of contentment. 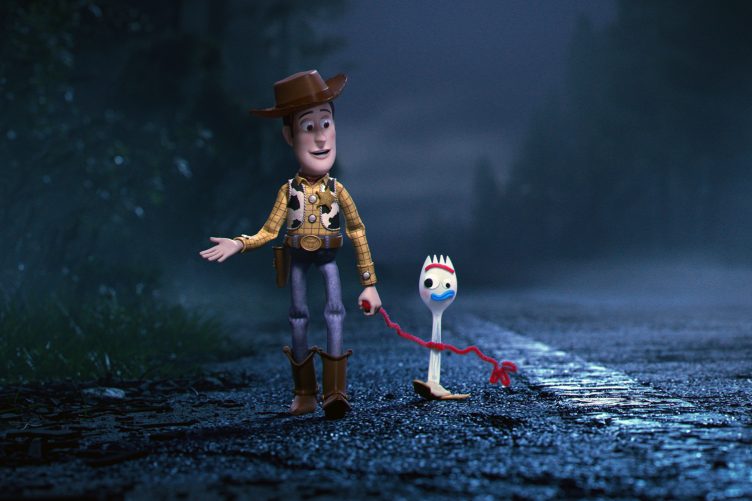