James McAvoy stars as a cash-strapped art auctioneer who pulls off a stunning heist of a top painting only to forget where he stashed it in the new Danny Boyle film, Trance. 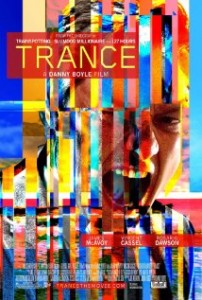 McAvoy’s character, Simon, works at a high-end auction firm and knows the complexities involved in trying to make off with a priceless painting. However, after falling on hard times Simon constructs the perfect crime. In order to pull it off he’ll need the help of some people a little more familiar with crime and enlists a gang led by Franck (Vincent Cassel). It’s Franck who will handle the actual theft, or at least that’s what Franck believes. The deal’s simple: Franck will pay off all of Simon’s massive debts and, in return, Simon will help the gang steal a $27 million dollar painting. Simon, fearing Franck will just kill him once the deed’s done, comes up with a plan to act as insurance: He hides the painting in a secret location. The trouble is that Simon’s plan backfires when he gets hit on the head during the heist and forgets where he’s hidden the painting.

The gang’s so intent on getting the painting that it’s willing to resort to any means to find it. Once the old-school tactics fail to work they turn to the unlikely idea of having Simon undergo hypnosis to recall where he hid the painting. Simon decides on a pleasant-looking doctor by the name of Elizabeth Lamb (Rosario Dawson) and heads off for a session while the rest of the gang listens in on the whole appointment.

If that sounds a bit far-fetched, then you’ve just seen the tip of the iceberg. That introduction is the most straightforward, easily digestible part of the plot in the entire film. From this point in everything becomes surreal and circuitous. Going through the logic paths would take a small thesis. Suffice to say that, along the way, you’re not at all sure who’s who, what’s what or where it’s all going to go. You’ll make up your mind out direction only to immediately have it change course and then change back and away again in an instant. Nothing is as it seems or everything is exactly as it seems. Yes, it’s the classic mind-bleep movie. It will make fans who saw it think immediately of Inception.

The story holds your interest at the start and then bogs down heavily in the middle. It finally starts to clean itself up for the last act and then gets a bit lost yet again ending with a final scene that really doesn’t work at all for me. Worse, the film specifically keeps you off your feet but in a way that feels entirely contrived and that tugs at the very foundation of the story.

The acting is solid with McAvoy playing Simon perfectly. We can feel his anxiety at every turn. Cassel’s a very good actor and his Franck is handled well. Dawson fares the worst of the bunch with her therapist role. She doesn’t ever really sell me on her motives or her believability. She looks great in the film and that’s important given the plot. The score felt a bit much with it amping up the energy a bit too often. The look works but it’s nothing special.

The real problem for me is that the film asks you to buy into a plethora of plot elements and, frankly, I didn’t buy into any of them. I don’t believe the gang would’ve turned to hypnosis and, if they did, go about it the way they did. I don’t believe Simon’s entire line of thinking makes much sense. Franck’s endless acceptance of the situation seems completely out of character. Add to all of this visuals that you can’t trust and it adds up to a film that feels so much longer than its 101 minutes that delivers you to the end scratching your head.

There’s a moment in the film when a key character gives another a choice (think, The Matrix) and for those that opt to see the film, I choose to push the button.