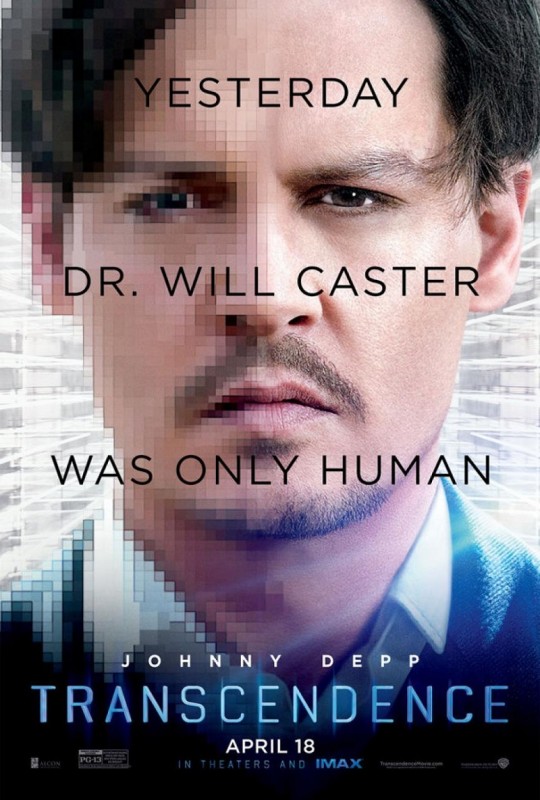 Artificial intelligence has been a source of fear in the movies ever since some human being imagined a plot in which a smart computer might not like its subservience to humanity. There are many examples of this theme, notably 2001: A Space Odyssey, Star Trek: The Motion Picture and WarGames. Despite all of the modern trappings and special effects, Transcendence is really just another film in the same vein as these others. What would happen if a sentient computer system took over? Unfortunately, Transcendence tries to embrace too many genres at once and doesn’t succeed at most of them. If I got the message right through all of the clutter, this is ultimately a love story that transcends human limitations. In that case, a better instance of this theme was last year’s Her. With its darker approach and exploration of near-future science, Transcendence is more like a reverse Her that I’ll call Him in which the focus is on the simulated being instead of the human one.

Perhaps part of the problem with Transcendence is that it’s the first feature film for director Wally Pfister and writer Jack Paglen in those roles. Pfister was the director of photography on all of Christopher Nolan’s projects since Memento, so the visuals are up there with the best. Paglen borrows from a lot of other movies and TV shows, including Demon Seed, Terminator 2: Judgment Day and even NBC’s Revolution, so this just doesn’t feel like an original experience. It seems the most to me like the modern version of The Fly as a scientist gets consumed by his work. This kitchen sink approach tends to confuse audiences rather than focus them, and the whole film suffers despite some strong elements like acting and special effects.

The title comes from a phenomenon described by Will Caster (Johnny Depp), a Berkeley artificial intelligence expert who’s sort of a rock star among scientists with Wired cover appearances and packed lecture halls. He envisions a future in which a sentient computer with the accumulated knowledge of human history will overcome the limits of biology and physical hardware to reach a state he calls transcendence. Will’s wife Evelyn (Rebecca Hall), best friend Max Waters (Paul Bettany) and colleague Joseph Tagger (an underutilized Morgan Freeman) all work in the same branch of science, and Will has already created a supercomputer that’s the smartest one available. When Will is targeted by a group of anti-technology terrorists and dealt a death sentence, Will consents to Evelyn and Max uploading his consciousness and brain’s wiring and combining it with the supercomputer so that he can continue to live in some way. Of course, nothing is as simple as that.

Once this digital version of Will — is it really him or just a great simulation? — reaches the Internet, Evelyn has to go into hiding because the terrorists want to destroy him and the FBI, courtesy of Agent Buchanan (Cillian Murphy), wants to examine and investigate him. The plot twists and turns in a variety of directions from this point forward, and the story just seems to get more and more ridiculous. There are banks of solar panels stretching as far as the eye can see into the desert, and the digital Depp exists almost like the titular character in The Wizard of Oz as a head or torso on a video monitor.

The cast is really the best part of the film and probably what would draw people to this mess anyway. Some people will always go to see Depp in his lead roles; they will likely be disappointed here because this is simply not a challenge for him at all. The women deliver the standout performances here. Hall is probably at her best and really carries her scenes, while Kate Mara as terrorist leader Bree steals every scene she’s in with her calm demeanor and intense stare. The supporting cast includes Cole Hauser as a military type and Clifton Collins Jr. in one of the most offbeat parts in the film, which is par for the course for him. Lukas Haas has a small but important role, and a real-life Wired cover boy makes an appropriate cameo.

Special effects are crucial to pulling off this story. Some of the work went into enhancing the environments to make them look bigger or more technologically advanced than they really are (extended lab space, etc.). The digital version of Depp is key to the experience. He progresses from a crude image of Will in his final days with electrodes hooked into his brain to a more fully realized computer graphics character. Watch carefully, and you’ll notice the glitches and imperfections on the computer screens, which was nice to see rather than perfect graphics all of the time. There are plenty of shots of nanites moving around and forming shapes. I found this to be one weakness in the effects. I’m not sure that there’s a better way to show them, but in some of the wide shots, I swear that I was watching one of those cheesy bee invasion movies from the ‘70s or ‘80s. Ironically, a motion picture that partly serves as a cautionary tale about the evils of computer technology requires powerful graphics engines to render all of the complicated visual effects.

I hoped for much more from this movie, especially given Depp’s interest in technology and pickiness about film roles. I said going into the film that it would be a failure if there wasn’t even one joke about Internet porn. Hell, Will has the ability to go anywhere connected to the Internet. How could the screenwriter pass up a chance at just a little levity in a serious movie? Will’s digital doppelganger is best when focused instead of spread across multiple tasks. This movie tries to be a cyberthriller, action film, sci-fi flick and romance all at once, with only the romantic aspects really resonant because of Hall and Depp’s acting. Transcendence never manages to rise above other similar movies and instead rapidly descends to a place far below an underground data warehouse.