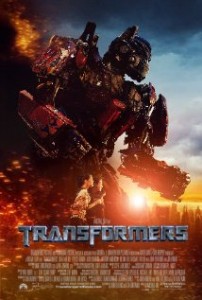 Transformers is a world I knew very little about. I was older when the toys hit the store shelves and never watched the cartoon series. In fact, I didn’t even realize that they consisted of good and evil sides. I just thought they were a bunch of creative multi-function toys.

Turns out that none of that was a detriment to seeing this movie. From the first moment on I was hooked. Michael Bay has taken a rather limited concept and turned it into a wondrous movie experience. The ride the movie takes you on is one that will keep you entertained for the duration. The story is decent, the effects incredible and even boasts a wonderfully campy but mainly funny array of dialogue.

Yes, there is much about the story that could have caused a major disconnect with reality and yet it just didn’t happen. By the first third of the movie you’ve already adjusted to just about anything being able to morph into a complex “autobot” within seconds.

The acting is notable simply for the humor of it all. No one here takes it too seriously with the possible exception of Jon Voight who seems a bit too professional for this role. The real winner of the show is the voice talent for the various Transformers, especially the one voicing Optimus Prime. If the voices were done wrong the movie literally would not have worked for me. I can’t really say why they worked, they just did.

If there was anything to complain about it would be that some of the action was simply happening too fast. You often aren’t entirely sure which Transformers are battling it out or who’s winning.

This is a movie that I went into fully prepared to be disappointed. That does give a movie a leg up as it really has nowhere to go but up in its stock. I don’t think this one gains its respect just for this however. I was entirely won over by all the various characters to the point of genuinely pulling for the Autobots throughout.