Been off to a slow start this year with respect to movies. Not a lot has interested me so far and the few I’ve seen have been from last year. 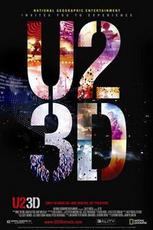 This Friday a bunch of us got together to see U2 3D. This film is pretty much a musical concert featuring the internationally famous U2 shown in 3D.

The concept is pretty interesting. Of late we’ve heard a lot about challenges in the music industry with the collapse of CD sales. That’s another topic and one that I have a lot to talk about so I’m not going to get side-tracked by it. The only part that is relevant is that this seems to me to be yet another novel way bigger bands can go about generating some serious revenue.

I’ve never seen U2 live and given my moderate interest in their music and the price of tickets to see them I doubt that I ever pay that much for the experience. However, to see them this way for $12 is another thing entirely. I got a chance to see what all the fuss was about and I was impressed with the band and the show they put on.

What I wasn’t so impressed with was the presentation of the “movie” itself. The footage is taken from an event in South America during the band’s “Vertigo” tour. The set list (the music played) included nearly all the best-known U2 standards alongside several other more recent entries (namely from Vertigo). However, even with this something fell flat here and I suspect I’m not alone in this assessment as this is only the second week the local theater chain is showing this film and it’s already reduced to a single showing each day. That’s almost never a good sign.

First, I think I might have to blame the theater. I’m going to see a concert. I expect the audio to be first-rate. Instead here we got a mid-volume, flat audio experience. There was little bass to impress and with the exception of one specific limited example, the audio seemed anything but 3D. Nearly all of it seemed continually to come directly from the screen and nowhere else. This resulted in a lack of energy that is critical to such events.

The 3D video was interesting but, to my mind, underutilized. There were a few key bits and sequences that made it worthwhile but mainly it served only as a limited-use gimmick and that’s the biggest shame here. Worse, the director seemed to think it was a great idea to use almost all slow pans around the event. These nearly puts one to sleep while watching. Very little happened that carried the beat or heart of the show itself. The crowd would be pumping their fists to the bass beat and we’d be casually rolling above the audience like angels floating on a cloud completely oblivious to the events below.

All-in-all I think this is a great idea. It just needs to be presented as close to a concert experience as possible with care taken to convey the show’s energy. This interpretation failed in that regard.