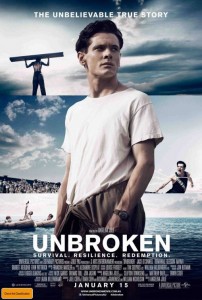 A young man trades a troubled youth for Olympic success before taking on his greatest challenge as a prisoner of war in Unbroken.

Louis Zamperini (Jack O’Connell) grew up in the shadow of his older brother Pete. In an effort to stand apart, Louis often chose to focus his boundless energy on hijinks that more often than not kept landing him on the wrong side of the law. Hoping to break the negative cycle, Pete convinces Louis to focus instead on a more glorious endeavor – training for the upcoming 1936 Olympic Games set to take place in pre-war Germany.  Zamperini’s natural talent and dedication at the Games set him up as a potential star for the 1940 Olympics – an event that will never come to pass because World War II draws the entire globe into years of devastating conflict.

Like many young men of the day, an eager Zamperini rushes to enlist and is immediately assigned to a bomber squadron where he embarks on one deadly mission after another. During a fateful excursion, the plane runs into mechanical trouble, and the crew is forced to ditch it into the vast open sea. Zamperini and the crew face a new unexpected challenge – surviving long enough to be found. What none of them counted on was being rescued by the enemy. The Japanese captors assign the survivors to a hellish prison camp where a sadistic Japanese officer takes pride in destroying the will, spirit and body of the young American Olympian. 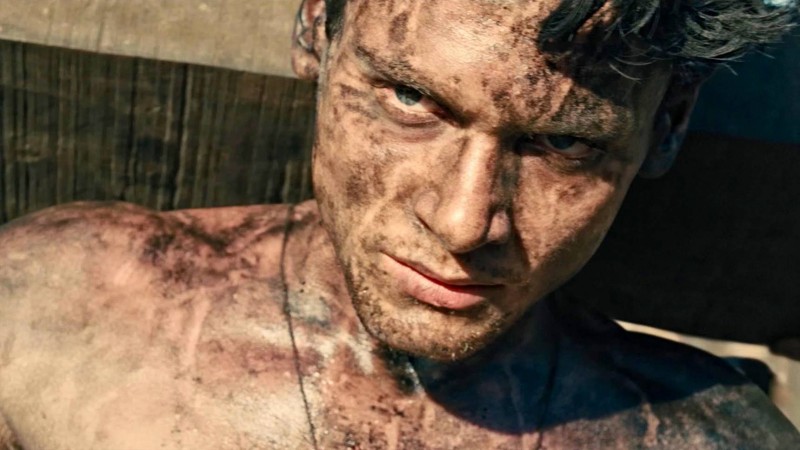 This film from the best-selling novel by Laura Hillenbrand (Seabiscuit) is poorly executed under the direction of Angelina Jolie. Zamperini’s story is transformed from a riveting, high-energy page-turner into a dull, lifeless and surprisingly ineffectual mess. The only standout is Domnhall Gleason in a bit part as Zamperini’s war buddy Phil. The rest of the cast, including O’Connell, lacks any sense of authenticity or immediacy. They’re often covered in dirt that looks like it was applied with the uniform precision of a machine. Zamperini’s nemesis (Takamasa Ishihara, better known as Japanese rock star Miyavi) is entirely miscast. The role calls for an actor who’s able to impart an immediate sense of both apprehension and dread. Instead, Ishihara most often appears cartoonish and vulnerable. The soundtrack is every bit as lackluster as the performances.

The biggest failure of the film is in Jolie’s insistence on using far too many flashback sequences. Every time the story begins to engage, we’re immediately ripped out of the moment and into another unnecessary shot of the past. The film’s only saving grace is a wonderful closing montage of the real Zamperini. What started off as a film with high Oscar expectations ends up as one of the year’s biggest letdowns. It takes an incredible story of triumph over the odds and makes it all seem little more than trivial.