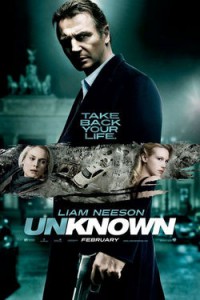 While on an industry event of my own I managed to find the time to check out Liam Neeson‘s newest film, Unknown. Neeson’s character is (ironically) on a trip with his wife as a guest speaker at an industry event in Berlin. After an accident he wakes up several days later in the hospital and, upon leaving, finds someone else has adopted his identity. Even his own wife (played by January Jones) doesn’t seem to know him. He’s clearly perplexed by the entire situation as anyone clearly would be.

He then embarks on the complex task of finding out just what’s going on with the help of a young woman who was in the accident with him (Diane Kruger). The plot thickens as no amount of digging seems to tell his side of the story and only adds more evidence to those around him that he’s the one making things up. It all frustrates him to no end causing more angst and more tension for the viewer along the way.

The movie feels like a mixing of both The Bourne Identity and Frantic. It certainly kept me thinking for most of the film and wondering exactly how this would all come together. There were so many elements whose balance would either make or break the film. When it finally does resolve, at least for me, it was less than satisfying. To say there’s a twist involved would be an understatement. This movie really made me wonder if Hollywood has entirely run out of ideas and now can only try to one-up each other by having a bigger twist than the last season of movies. No thanks.

On the plus side this is a much better effort than Neeson’s Taken (my worst film from 2009) but not by leaps and bounds. For me, I now have major doubts about any movie he’s headlining. You simply can’t put together too many of these kinds of misfires in a row and continue to have a viable, respected career.

One curious note is that I had a complete disconnect with the actress chosen to play his wife—January Jones. She just seems entirely too young to be with Neeson who’s now almost 60. I wasn’t aware of anything else Jones had done but was certain she couldn’t be any older than 25. I just looked up her bio and find she’s 33. January, take that as a huge compliment. You look nowhere near 33.