A troubled young woman unwittingly commits herself to a mental institution where her worst fears bubble to the surface in Unsane.

Sawyer Valentini (Claire Foy) has the outward appearance of a completely normal young woman with a new job and a simple, quiet existence. However, beneath the surface lurks the injured victim of a calculating stalker of whom she’s desperate to be free. The impact of her past experience leaves in its wake a broken vessel. Sawyer’s need to move on is continually undermined by her inability to put the episode to rest. It colors everything that she does to such a degree that she begins to question her own health.

In a moment of clarity, she decides to reach out for help by turning to a counselor at a local mental facility. Their seemingly insignificant discussion takes on ominous repercussions when Sawyer realizes that she’s been deemed a danger to herself and others. The hospital becomes the arbiter of the state of her mental health and seems intent on keeping her there against her will. The seriousness of her situation only deepens when she becomes convinced that her stalker is one of the orderlies working there. Is she quickly becoming unglued, or is there something much more sinister at work outside her own mind?

This may be an original story, but it might as well be a companion to the best-selling book The Gift of Fear by Gavin de Becker — a book that’s featured in a key scene of the film. de Becker’s seminal treatise explains the core difference between warranted and irrational fear, a subject paramount to every ounce of this film. Director Steven Soderbergh gives us a psychological mind screw that’s both half-brilliant and half-baked. At its best, the tension and thrills are on par with Alfred Hitchcock‘s best work, most notably Rear Window. However, Soderbergh also sadly seems to be the film’s worst enemy.

Let me start off by saying unequivocally that I love, love, love this film, but it’s a fundamentally flawed relationship. Soderbergh famously shot the film entirely with cell phones. Why? I can only assume because he could. The choice does little to help the immersion. I can see what the director had in mind, but it just doesn’t translate. Odd camera angles and perspectives are clearly meant to deepen our discomfort, but they more often than not just come across as distracting. There’s also a bit of unintended campiness with several of the performances, which is my nice way of saying “some bad acting.” The two leads are not included in that assessment. Both Foy and Joshua Leonard as Sawyer’s adversary are flawlessly cast. Few of the others are, including an awkward performance by famed Hollywood veteran Amy Irving. One bright spot among the second tier is Jay Pharoah as a curiously informed fellow patient.

The real disappointment is with critical information that Soderbergh either chose to limit or didn’t think to include. Huge plot potholes could have been avoided with minimal dialogue, leaving the audience to focus on the spiraling decent of Sawyer’s psyche. Instead, we’re pulled out of the moment to ask several obvious questions. There’s also a surprisingly ambiguous scene that is apparently a flash-forward, but that isn’t clearly expressed as such.

This heavy judgment certainly seems to stand in stark contrast to the high rating that I’m giving the film. The reason is that Soderbergh’s effort is so unforgettable. The soundtrack is hauntingly effective. The anxiety builds exponentially despite the blemishes. It continually keeps us guessing — in a good way. What makes it to the screen is a film that could have been one of the greats, if only… It could still reach that hallowed summit with the benefit of an open-minded director’s cut. I won’t hold my breath. 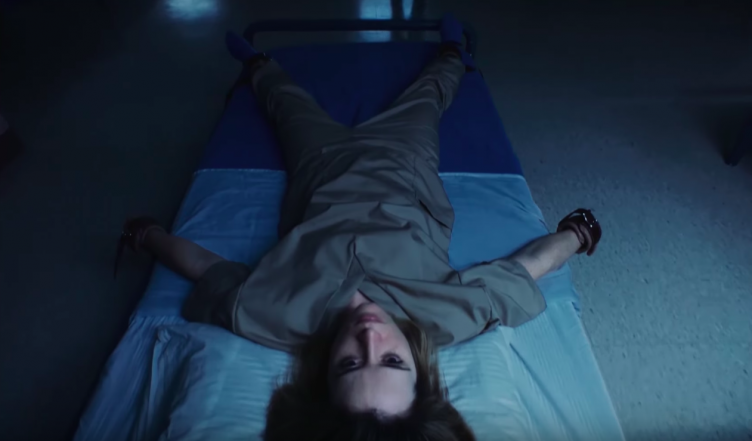