I saw George Clooney‘s latest this past weekend—Up in the Air. The movie’s about a consultant who gets paid to fire people for companies that don’t want to do the dirty work themselves. It was a bittersweet experience to say the least. My job ended in July and I haven’t found anything myself yet so watching endless people get axed by Clooney wasn’t exactly a thrill.

Much has been made of this movie calling it a clear Oscar contender so I wanted to be sure I managed to sneak it in before I closed out my 2009 slate of films. 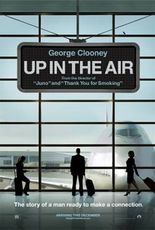 Essentially Clooney’s character is enthralled with his airbound life that keeps him away from home for all but roughly two weeks (two weeks that he refers to as hell). He loves the upgrades, the perks, the special treatment he gets for being a top-mile flier. Then his world begins to unravel as a young upstart at his company convinces the boss (played wonderfully by Jason Bateman) that it’s time to revolutionize the company by taking all these reps off the road and doing the deed virtually via webcam.

Clooney, in an absolute panic goes right after the plan showing the boss that the young executive might have some great ideas but that she really knows nothing about the actual business that she’s attempting to re-invent. The rest of the movie is pretty much about the two of them traveling about while Clooney shows her the harsh realities that make up the bulk of what they really do.

Along the way Clooney also runs into a near-equal counterpart in female form played by the gorgeous Vera Farmiga. We also find out that Clooney really has no connection with his own family since he’s never in any one place long enough to put either put down any roots or have anyone tie anything to him.

The film turns out to be a story of awakening. Clooney starts to understand that, while he loves his life, it’s not much of an actual life after all.

Clooney does a good job handling the role and the movie moves along pretty much as expected. However, the ending is a complete disappointment. It ends with just a simple hint that he’s figured it out but that’s it. I’d have really liked to see a bit more than this and the response from those in the theater with me seemed to support my thinking.

So is Up in the Air Oscar material? It will likely be nominated but I’ve seen several better movies this year and thinking about it against past films there’s really nothing special about it. It’s just a nice solid film that tells you a decent story for a couple of hours.