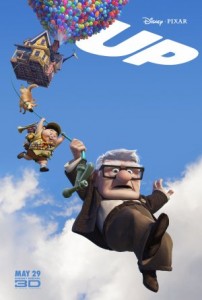 This weekend found me catching Pixar‘s latest film, Up. I had a feeling that this might be something special. As of yesterday I couldn’t locate even a single negative review of the film. Critics of all types seemed to find magic in this film.

We saw it in 3D but I am fairly certain that seeing it without 3D wouldn’t take anything away.

To be fair, it’s a really strange film. The plot is so absolutely over-the-top that it seems hard to believe you can enjoy it without cringing, and yet you do.

The first several minutes or so are all setup to the main story. We get an amazing backdrop montage about the main character taking us from his earliest days up to his current status as a mature senior citizen. The culmination of this sequence is so poignant that it impacted all ages throughout the entire theater. You could hear a pin drop.

For a movie with a seemingly paper-thin concept it keeps you guessing and pulling for the protagonists. The film has as much substance as any traditional movie you could name. The fact that the actors here are nothing more than computer generated figments doesn’t matter one bit.

The movie’s tone is, in my view, entirely new for Pixar. It’s easily their most sensitive endeavor to date. Initially I was concerned about the theater full of children and yet Pixar manages to present rather mature emotions in a way they can handle and relate to.

The music is nothing special here except that it fits the movie like a glove. It also reminded me, at least the first few notes, of previous efforts. There’s no Randy Newman-type pieces here and that’s just fine.

Another nice bit is the traditional short that’s shown just before all of Pixar’s main feature. This one is called Partly Cloudy and it’s a wonderful pairing for Up. It’s a touching fairytale about clouds that conjure up newborns of all species to be handed off to awaiting storks for delivery. The story focuses on a dark cloud that has difficulty making creations that are as cute and cuddly of those of his sky-mates. It sets the stage wonderfully for the feature film.

Overall this is one of Pixar’s best achievements. It’s another winner in a seemingly endless streak of success. While I do believe a few of their other films top it, Up firmly belongs close to the very top of that list.