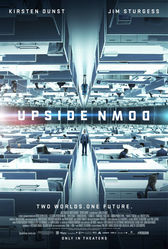 Gimmicks or unconventional plot conventions in movies work only as much as they are supported by the story or other major elements. The black-and-white segments of The Wizard of Oz work so well because they truly balance the rest of the story and take place in a different world. Upside Down tries something creative that I’ve never seen before in movies. Two worlds with opposite gravity move through their shared orbit like twin planets so close that a skyscraper is tall enough to connect the worlds. This leads to some really cool scenes and potential plot points. Unfortunately, what could have become a memorable sci-fi film doesn’t quite make the grade. Upside Down starts strong and somehow loses momentum along the way.

Upside Down comes from the mind of Argentinean writer/director Juan Solanas. The film started with an image he encountered in a vision of a man on a mountaintop looking up at a woman on an opposite mountaintop facing downward. Solanas certainly brought that vision to life in Upside Down and explained the rules of these two worlds via a voice-over by main character Adam (Jim Sturgess) at the beginning of the film. Each world has its own gravity, and people and matter on those planets are only acted upon by their planet’s gravity. One can offset his weight and the effects of gravity by using matter from the other world, but contact between matter from both planets eventually causes the inverse matter to burn. OK. I get it. Solanas uses these rules to establish the possibility that someone could weigh themselves down with matter from the other world to effectively act like they’re from that world. This concept features heavily — pun fully intended — in the story of Adam and Eden (Kirsten Dunst).

The story of Adam and Eden is part Adam & Eve and part Romeo & Juliet with elements of West Side Story and any other romance where forces keep two young lovers apart. Adam grew up on the lower planet, and Eden grew up on the upper planet. They met as children when they were both climbing the mountains that nearly touch in their worlds. Contact is forbidden unless authorized, so they have to meet secretly in the forest and mountains. Over time, they develop a relationship with Adam pulling Eve down by rope to hold her close. When caught, Adam lets go of the rope and Eden falls to her world. Adam thinks that Eden is dead until he sees her on TV 10 years later as an employee of the corporation TransWorld, which has a skyscraper that connects worlds and a zero-numbered floor that straddles the gravity barrier with employees in both worlds within a few feet of each other. Adam figures out how to get a job at TransWorld in order to talk to Eden and hopefully revisit their romance.

This concept leads to some cool visual scenes and a lot of effort by Adam to enter the opposite world. Upside Down is firmly set in the sci-fi genre as part heist film of sorts and part romance. Adam finds an ally in the affable Bob Boruchowitz (Timothy Spall), a research scientist who literally sits above Adam at TransWorld. Bob slips Adam some matter from his planet and an ID badge so that he can move about freely. This means that Adam can spend an hour or two in Eden’s world, and they meet at the Dos Mundos restaurant. The problem is that Eden has amnesia from that fall 10 years ago and doesn’t immediately remember Adam. Add on TransWorld security officers who are after Adam for the breaches of security that he makes, and it seems like a bit too much to overcome.

Dunst and Sturgess make a good enough couple. They both engage in subtleties of expression and emotion rather than over-the-top acting in light of these strange sci-fi circumstances, and that approach works wonders in selling the premise. I liked their scenes together more than Sturgess running around both worlds with various amounts of matter stuffed into his clothes. Spall is so damned likeable that he just about steals every scene from the leads. Familiar character actor Blu Mankuma also makes an impression as Albert, a man who puts up Adam in his place. Sadly, this is not an actor’s movie but instead a film that relies almost too much on its premise. Within that framework, the separation between worlds really only gets explored as it relates to Adam and Eden. The worlds are separated socially, economically and politically. The upper world is cleaner, richer and more well-to-do with the citizens and workers controlling TransWorld and other shared services. The lower world is grimier and poorer with its citizens envious of the upper world and probably on the verge of revolt. Although these elements of the worlds are touched upon, it would take about another half-hour and a more expansive script to form a complete movie that uses every facet of the concept.

I still like Upside Down. Had Solanas made a short of his concept or some other movie in this setting first to get the experience, Adam and Eden’s story would really shine. There’s some really inventive stuff in the shots as the gravity effects wear off and Adam falls back to his planet with the camera flipping upside down at just the right moment. The visual effects aren’t distracting at all, and those scenes created with physical effects rather than digital trickery work the best. The poster draws you in with its scene on the special floor of TransWorld and its logo that flips one of the words in the title. Not all sci-fi concepts work in the end. The TV series Lost introduced all kinds of interesting concepts about travel through time and space and ended without explaining any of it. Similarly, Upside Down is an ambitious movie about two different, joined worlds that still feels half-baked.