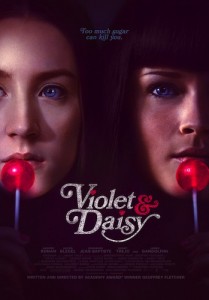 If assassins ever come to my house to kill me, I hope that they do it quickly and without me knowing about it in advance. I’d rather be surprised and moving on to the next world — where I hopefully have plenty of time to watch movies and play games — than stuck here dealing with an incompetent or overly friendly hit man with little or no experience. Unfortunately, Violet & Daisy subjects a lead character to an agonizing, lengthy hit rather than a clean and quick one. This means that the audience has to endure this whack job as well as the wack jobs sent to take care of business. A better title for this snoozer might be Violent & Crazy or Violent & Lazy.

I don’t know why the producers thought that it was smart to identify writer/director Geoffrey Fletcher as an Academy Award winner in the advertising for this film. It’s true that he won a screenwriting award for Precious, but noting this in comparison to Violet & Daisy is like pointing out that Norman Rockwell designed a coloring book. Rockwell wasted his skills, and the coloring book is still just a juvenile effort. A small cast and a tedious plot ensure that a bullet to the brain in the theater might have been the only salvation.

Violet & Daisy takes place in present-day New York City. The titular characters are teen assassins who only do jobs when they need money. Their advantage is their youth; it’s also a disadvantage in that they just don’t know how the world works or how to really pull off a hit without screwing it up somehow. Violet (Alexis Bledel of Gilmore Girls) likes to carry two pistols on jobs and is more violent than the quiet, older Daisy (Saoirse Ronan), who is about to turn 18 years old. Their boss Russ (Danny Trejo in one scene) sends them on a job to take out someone who double-crossed someone else and made off with their money. Later on, another assassin named Iris (Marianne Jean-Baptiste) plays backup to the girls, but this wonderful actress is as superfluous to this film as her character is to the plot.

Violet and Daisy first appear as nuns who dispatch a target in a violent, bloody job. They swear off kills as soon as they get paid by Russ. That doesn’t last long because their pop idol, Barbie Sunday (Cody Horn in ads, photos and other promotional materials), just put out a new dress in her clothing line that they simply must have. The girls decide to take one more contract so that they can afford the dresses and have enough cash to last until they try another line of work. Their target is a sad sack named Michael (James Gandolfini) who knows he’s going to die and does little to prevent it. Gandolfini has the skills to handle both sides of the gun. In this film, he doesn’t get a lot to do as the victim except talk to Daisy and bake cookies for the two girls. It would have been a much better story if Michael was the reluctant hit man who has to shoot the girls.

Once the girls enter Michael’s apartment, it feels like they’ll never leave. In fact, this plot might work better as a three-person play with a single apartment set than as a film that I couldn’t wait to be over. Fletcher’s skills probably lean more toward writing than directing. The pace is awful, and the characters are paper thin with little or no motivation. Rather than finish their job and leave, the girls engage Michael in lengthy conversations about his life and what he did to draw someone’s ire. Even when the girls try to shoot Michael, they botch it and cause the movie to go on for another 45 minutes. Too much emphasis is placed on how cute, girly, fun and young Violet and Daisy are. It’s obvious from their dialogue and mannerisms, so it’s not necessary to also show them sucking on lollipops and talking about clothes. The tagline is “Too Much Sugar Can Kill You.” That saying has an unintended second meaning in that the excess of sugar and fluff in this film can kill its box-office take, too.

I can’t finish this review without calling attention to Gandolfini’s untimely passing. Although his skills are undeniable, his choice of films that were released this year, including The Incredible Burt Wonderstone, is questionable. We’ll never know what his comeback from this dreck might have been. Bledel has been in few films since her hit TV series, so I’ll give her a pass on this role. It’s certainly different from her past. Ronan had such great promise earlier in her career; her teen flicks like this one and The Host waste her abilities. Perhaps Fletcher tried to deliver a project that’s almost like a dumbed-down version of Sucker Punch, another bad film that features attractive young women brandishing guns. Violet & Daisy is out of his comfort zone and far past the expiration date for the action flicks of the past that had too much talking and inaction in order to appear hip and current.