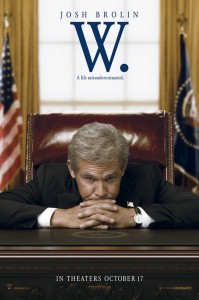 There really isn’t a whole lot to like here. Stone knows how to make a riveting movie and this is not one of them. It does a great job of presenting the facts (which he’s had a past tendency to play very loose with) and the acting is pretty solid across a very large cast. Josh Brolin does a nice job as Bush. Richard Dreyfuss does an eerily good job as Dick Cheney and Jeffrey Wright plays a spot-on Colin Powell.

There are some miscues with the cast. Elizabeth Banks doesn’t work for me as Laura Bush. In scenes where they’re supposed to be older she makes it look like Bush is robbing the cradle. Ellen Burstyn as Barbara Bush was a bust for me. She played Barbara as a complete curmudgeon lacking all the charisma that Barbara does have. Scott Glenn was very disappointing as Donald Rumsfeld. It was as if he paid no attention to anything Rumsfeldian. The worst was Thandie Newton as Condolezza Rice. This portrayal seemed like some really bizarre impression instead of a portrayal.

As far as the story, Stone tells it pretty straight though he does take some famous elements and tosses them into scenes they really don’t belong to. Then there’s the chocking-on-a-pretzel scene that seems like something thrown in just for the hell of it. One moment the story is following a plotline and then next we get him choking on a pretzel and then back to the storyline.

In the end it fails for me in the biggest possible way a biopic can fail. You really learn nothing you didn’t already know about the person. Nixon had this same problem, for example. Maybe it’ll be of use for someone 20 years from now that wasn’t old enough to have lived through this administration but for now it’s like watching old news. It has its moments. There’s a scene where Cheney, in a closed-door meeting, makes the case for war in Iraq against the resistance of Colin Powell that just really pulls you out of your seat. Sadly this is the only such high point I can recall. I wanted insight into the inner workings of this guy beyond what everyone already knows and I just didn’t get it here.

Worst of all this movie succeeds at doing something I didn’t think was possible. It turns the worst president in our history into a sympathetic caricature. You want to give the guy the pass given all the so-called “challenges” he had to “overcome” to get as far as he did. Save me…..