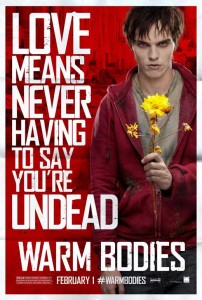 Vampires seemed to be all the rage for a while as far as classic horror movie types. Thanks to The Walking Dead and other successful properties like the novel World War Z and the movie Zombieland, zombies have given the vampires a run for the money. Warm Bodies began life as a 2011 novel from Isaac Marion before its translation to the big screen. In a way, it seems like it’s really jumping on the zombie lunch wagon, but it has enough amusing moments and a different approach to zombies that it merits a lurch over to your newest megaplex for the only zombie romantic comedy in memory.

Warm Bodies comes off as a mash-up of the buddy aspects of Shaun of the Dead and the structure of Romeo and Juliet. Writer/director Jonathan Levine showed that he can handle comedy as the director of the cancer comedy 50/50 and the writer/director of The Wackness. The comedy here is more amusement than laugh-out-loud moments. In this world, zombies somehow retain thoughts and direction — however shambling — when they’re “new” but degenerate into skeletal “bonies” when their flesh is gone. I don’t understand why bonies move with jaguar speed, but I won’t nitpick about zombie behavior. This film centers on R (Nicholas Hoult — the boy from About a Boy and Jack in the upcoming Jack the Giant Slayer). He’s a zombie with an inner monologue and a love for old vinyl who nevertheless can’t remember his full name. When zombies eat brains, they also experience the memories of the eaten — one of the remaining joys in, uh, death for R before he becomes a boney. R’s best friend is M (Rob Corddry), a guy he meets every now and then for conversations made up of grunts, hand gestures and an occasional word.

The surviving humans in this unnamed apocalyptic city live in a safe compound with a giant wall around it. General Grigio (John Malkovich) protects the people from the zombies and bonies by conducting raids and manning the wall. His daughter Julie (Teresa Palmer of I Am Number Four and the underrated Take Me Home Tonight) goes out on missions for supplies with good friend Nora (Analeigh Tipton) and boyfriend Perry (Dave Franco). When zombies attack Julie’s party, R is in their number and starts to have feelings for her after absorbing Perry’s memories. (You can guess how.) R also develops a heartbeat and starts to change back toward human, including regaining some speech and blood in his veins. R saves Julie, takes her back to his zombie bachelor pad on an abandoned plane and looks over her for a few days. They develop a bond, but Julie has to return to her people. When R notices that other zombies start to “get better,” he tries to convey that to Julie so that they can join forces against the bonies.

Rather than go the full zombie treatment of a book like Pride and Prejudice and Zombies, Marion took the basic story of Romeo and Juliet and built his own world and plot around it. It’s clear that R is Romeo, Julie is Juliet, Perry is Paris, M is Mercutio, Nora is Juliet’s nurse, the Montagues are the zombies and the Capulets are the human beings. That’s about as deep as it gets into Shakespeare although there is a balcony scene. The use of pop music in a tongue-in-cheek way resonates more from the film. R plays “Missing You” by John Waite on his record player, and “Hungry Heart” by Bruce Springsteen figures in a scene. We hear “Rock You Like a Hurricane” by the Scorpions when the zombies plan an uprising against the bonies.

The good special effects makeup and digital effects in Warm Bodies don’t distract from the story although the bonies are reminiscent of the mummies from the Brendan Fraser Mummy movies. If you’re squeamish, there really isn’t a lot of blood and gore in this PG-13 movie; it’s more decay than anything else. Hoult and Palmer make a good screen couple, and when they kiss, life jolts into R’s body and eyes. This is a perfectly pleasant movie that takes its place in the growing group of alternative zombie films, but there’s nothing here that takes it over the edge to become a classic.