Zombie stories have been the same, more or less, from the dawn of their creation. We know zombies are dead humans infected by some apocalyptic virus leaving them in an undead state doomed to shuffle somewhat aimlessly around collapsing cities and towns forever on the lookout for one thing—brains. It’s mindless existence if it could be called an existence at all. 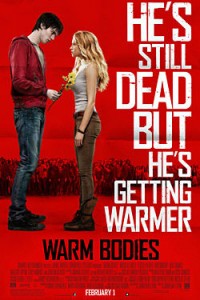 Warm Bodies gives us a new twist on the age-old tale. We meet R (played by Nicholas Hoult), a freshly killed zombie who wonders if this is all there is. Surely there has to be more. He remembers bits and pieces about his previous life but it’s all so hazy.  Somehow R knows, instinctively it seems, what the future holds. He’ll go on just like he has, drifting farther from humanity until, finally, he decays to the point of becoming one of the “bonies”—zombie skeletons who no longer even consider their previous existences.

There’s also “M” (Rob Corddry) who’s the closest thing R has to a friend. It’s hard to be anything more than an acquaintance when even the most basic speech is a trial. They run into each other, grunt knowingly and occasionally force out a word or two generally having to do with hunger.

We know that somehow R’s different. First, of course, he’s sharing cognitive thoughts. That alone sets him apart from every zombie we’ve ever met. Beyond that he also lives in an abandoned plane on a runway where he stores a collection of assorted remnants of his previous life including an interesting vinyl record collection. It’s clear that R would make Dylan Thomas proud in his insistence to not go gentle into that good night.

In one of his many mindless forays he encounters Julie (Teresa Palmer), a human who’s out with other humans hunting for various resources to bring back to their secure compound. It’s love at first sight for R setting up one of the most unique Romeo and Juliet stories ever told.

Their impossible relationship and the power it embodies is the focus of the rest of the film. The journey isn’t without its bumps. The tale demands that you not ask a lot of questions and just go along for the ride. The cute factor is high but it’s not enough to keep a few scenes from feeling a bit long.

When it’s good it’s rather entertaining but somehow I felt as if it missed out on chances to really shine. The music is vintage pop rock that’s both entertaining and apropos. The acting is solid enough if not noteworthy (and it’s hardly a prerequisite here). Corddry is as close to notable as you get. Kudos for being able to get a laugh out of a dialog of grunts and single words.

I think I liked the concept of it more than the story we actually get. It’s a curious and lightly fun film but nothing special.