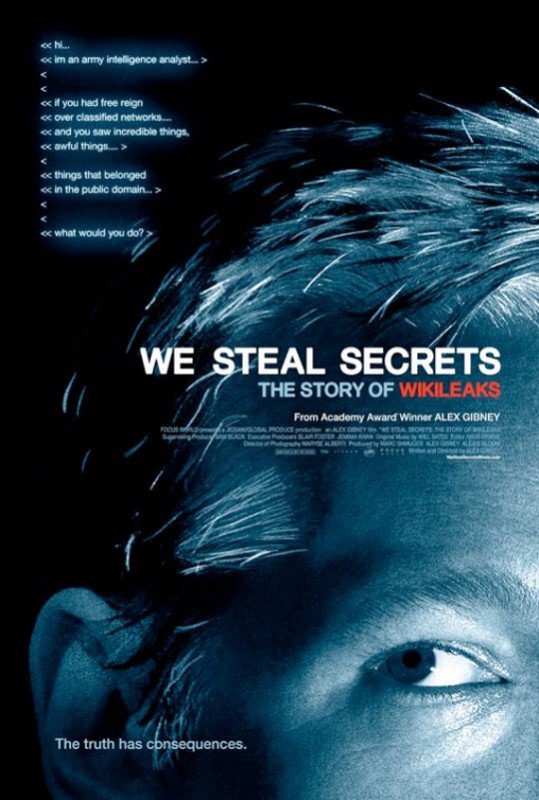 Like many people, I first heard about WikiLeaks when they released classified documents about U.S. operations in Iraq and Afghanistan in 2010. In the midst of the hullabaloo, two men became prominent for their activities. WikiLeaks founder/spokesman Julian Assange defended the release of the material, and Bradley Manning later emerged as the U.S. Army source of the documents that were funneled to WikiLeaks. Both men faced consequences for their actions. Assange is currently taking refuge in the Ecuadorian embassy in London, and Manning is serving a long sentence in a military prison. We Steal Secrets: The Story of WikiLeaks is really a documentary about these men and how their actions and connection changed the world and their lives. The title is misleading and is just one of a few disappointments about this film. WikiLeaks strives to make information readily available, and this documentary ironically suffers from the weight of too much data. If you stick with it, you’ll eventually see the point of it all, but I expected much more.

Writer/director/narrator Alex Gibney has an impressive résumé of documentaries with long titles that include the Oscar-winning Taxi to the Dark Side as well as Casino Jack and the United States of Money and Gonzo: The Life and Work of Dr. Hunter S. Thompson. He’s a master of keeping the film moving and conveying the information in a variety of ways from interviews with key figures to catchy graphics and film clips. The story behind this movie necessarily has lots of players, and Gibney builds his case slowly as he presents tidbits of information that lead to revelations about Assange, Manning and the release of the documents. The film opens with footage of the Space Shuttle Atlantis and its Galileo payload and relates a story about how NASA computers were infected with a computer worm — the WANK (Worms Against Nuclear Killers) worm — prior to the launch in protest to the deadly plutonium used in the satellite. Gibney links the worm to Assange because of a Midnight Oil lyric used in the worm’s on-screen message that Assange repeats in a clip and the confirmed origin of the worm to a group of hackers in Australia. (A native of Melbourne, Assange used the hacker name Mendax, a name that roughly translates through its Latin pieces to “noble liar.”) Gibney repeats this investigative technique often over the course of the film and backs it up with a variety of graphics, facts and footage. It requires a lot of patience at times until he makes his point.

I’m impressed with the list of interviewees in We Steal Secrets: The Story of WikiLeaks. There are between 10 and 20 main interview subjects, but that’s a lot of commentary to take in. You can’t discredit Gibney’s thoroughness, though. He tracked down early WikiLeaks associates like second full-time member and German IT technician Daniel Domscheit-Berg, volunteer Smári McCarthy and Icelandic parliamentarian Birgitta Jónsdóttir. They talk about the early days of WikiLeaks in both exposing the deceptive practices of the Kaupthing Bank in Iceland in July 2009 and the processing of Apache gunship video in March 2010 that was provided to WikiLeaks by Manning. This video showed the killing of Reuters journalists mistaken for the enemy as well as innocent Iraqi citizens and children and was released in April 2010 by WikiLeaks as “Collateral Murder.” That really drew attention to the organization right before Manning was inspired by the response to the video to gather and provide to WikiLeaks the treasure trove of documents that were later released in July 2010 (the Afghan war logs), October 2010 (the Iraqi war logs) and November 2010 (State Department cables).

Other prominent interviewees include Mark Davis, a journalist and filmmaker who followed Assange around for many months in 2010. It’s amusing to hear this insider refer to WikiLeaks as really just Assange, his $300 laptop, some SIM cards and a very cheap jacket that he put on for interviews. Similarly, Gavin MacFadyen, the director of the Centre for Investigative Journalism, dismisses comparisons of WikiLeaks to a major organization and instead calls it “a corner gas station with some extremely bright attendants.” General Michael Hayden, a former director of the NSA and the CIA, gives the film its title when he explains that “we steal secrets; we steal other nation’s secrets” in response to questions about classified information. This quote doesn’t come until almost three-quarters through the two-hour documentary, and that should have surfaced much earlier to shed light on the title. 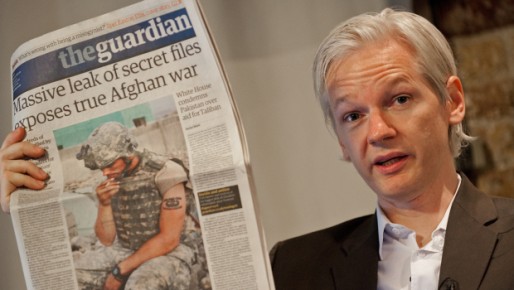 The film also delves into the personal lives of the two men at its heart to the point where I really felt like I got to know them and what makes them tick. Like Assange, Manning had a great interest in computers that led him to the Army and his access to classified information. Manning was already troubled by sexual identity issues — he currently prefers to be referred to as “Chelsea” and plans to undergo gender reassignment surgery at some point to become a woman — so when he unearthed all of this disturbing information, he reached out to “homeless hacker” Adrian Lamo for support. Lamo later turned in Manning, and Gibney smartly displays their exchanged messages in simulated computer entries to track their communication. Assange has his own personal issues that get exposed over the course of the film — from his early arrest for hacking to the charges brought against him by Sweden for rape in August 2010. Instead of returning to Sweden to face the charges, Assange has taken refuge in the Ecuadorian embassy rather than take a chance by leaving and being extradited to Sweden. Gibney talks to one of the two Swedish women involved in this situation, and her comments indicate that this all could have been avoided if Assange had just submitted to tests for sexually transmitted diseases rather than avoid their requests. A bit of a ladies’ man, Assange has a number of children that he fathered all over the world, so the evidence shows that he likely just pissed off the wrong women at the wrong time rather than committed rape. Assange comes off as a bit intellectually arrogant, deliberate in his speech and fluid or perhaps swishy in his motion and gestures.

It’s a testament to Gibney’s work that we learn a lot about Assange and Manning without any direct comments or interviews for the film. There is plenty of footage of Assange from press events and Davis’s cameras, so it’s easy to get a sense of the man and his ideas. Manning is a tougher nut to crack, but his words paint one picture that is fleshed out by his Army superior and the facts that comprise his background. Both men seem to have an ideal vision of society that they try to attain through their actions. Manning attributes his efforts to caring too much, and one man likens Assange to a John Lennon type and a “humanitarian anarchist.” Gibney had an opportunity to interview Assange for this documentary, but Assange demanded $1 million, a fee that Gibney wasn’t willing to pay. Such an interview would have likely extended the length of this film or otherwise burdened it with more information, and much like the volume of information provided by Manning, it’s too much to take in as it is.

I like this movie, and I applaud Gibney for his efforts. It’s certainly not his best work, but it’s not bad, either. The tone is perhaps too serious, and there are a lot of facts and data to follow. Gibney manages to keep the film engaging with graphics, quick cuts and a variety of footage, including clips from WarGames and Hackers. I once had a desire to use my computer skills to hack, and this documentary shows how that could have turned out badly if I poked my nose into the wrong place. I’m not sure that Gibney could have done anything more to tell the story of Manning, Assange and the release of the military records. The title is simply bad because it’s Hayden’s quote — not that of WikiLeaks — and there is very little of the story of the rise of WikiLeaks here. Perhaps a codirector could have helped Gibney focus on different aspects of his research or even entirely change the direction of the film. I hope that he follows up with another documentary a few years down the road when he can actually interview Assange and Manning. For now, We Steal Secrets: The Story of WikiLeaks serves as a good first pass of this ever-evolving story about the sharing of information in the digital age.